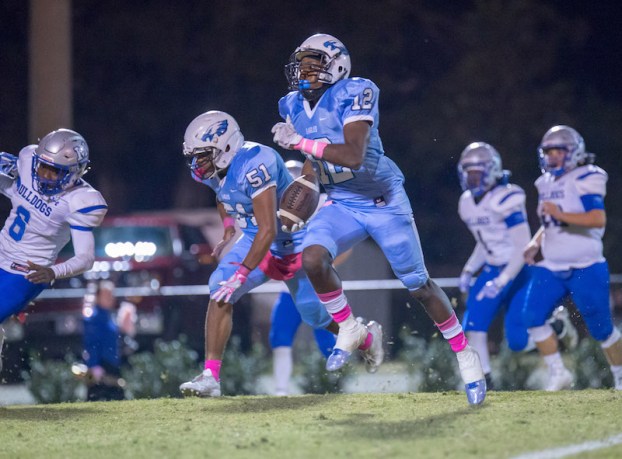 Calera picked up a game-winning touchdown on fourth down from the 10-yard line with .7 seconds left to play. The 28-27 thrilling win moved the Eagles on to round two. (For the Reporter/Larry Dancy)

CALERA – Things looked bleak for the Eagles as Jackson’s Nehemiah Pritchett strolled into the end zone with 1:18 left in the game to put the Aggies up 27-22.

Calera had failed to score on their last three drives, with two of those ending in turnovers. Nevertheless, Cornelius Brown overcame a rough second half and lead the Eagles (7-4, 5-1) 59 yards in 75 seconds for a touchdown on the game’s final play to beat the Jackson High School Aggies 28-27 on Friday, Nov. 10.

Calera High School head coach Andrew Zow acknowledged his team was rattled at times, but was also pleased with their effort.

“We did everything possible to give the game away, but towards the end defense, offense stepped up,” Zow said. “We’ve got some stuff we’ve got to correct, but overall our guys played hard.”

His defense was especially clutch in the first half as Jackson made their way into Eagles’ territory four consecutive times after a first drive interception, but only surrendered one touchdown.

Twice Jackson entered the red zone, but each time Calera forced a turnover on downs and forced four total turnovers in the half.

“Defensively, Coach (Trey) Simpson put a great plan together this week, our guys executed and it seems as if those guys are starting to figure it out at times,” Zow said. “When you have to grind it out like that and the defense has to make plays, we expect our guys to do that.”

The Eagles defense would go on to have seven takeaways for the game. Calera took a 14-7 lead into halftime, but the Aggies’ offense caught fire after the break.

Jackson quarterback Lane Rotch quickly lead his team down the field in the opening two minutes and drew them within a point of the Eagles 13-14 on a 17-yard touchdown pass to Anthony Sellers.

After a Calera punt on the ensuing possession Rotch found Keymontae Williams for 61 yards and ran the ball in himself on the next play to give the Aggies their first lead, 21-14.

Rotch led the way for Jackson throwing for 257 yards, two touchdowns and a rushing touchdown with two interceptions. Zow leaned heavily on running back DeCorean Mickens the entire night and turned to him again in the third quarter with the team down for the first time.

Mickens responded with the drive of a lifetime gaining all of the Eagles’ 86 yards on six carries, one reception and capped it off with a 2-yard touchdown and the two point conversion to boot.

“Dee Mickens is one of those guys who is probably flying under the radar, no one really recognizes him, no one gives him a whole lot of credit–even at the college level.” Zow said. “But I do think he’s a great leader, comes to work every day, he’ll play any position we ask him to play. He just comes to work.” Mickens carried the weight for Calera Friday night finishing with 156 yards of total offense and two touchdowns.

Calera entered the fourth quarter with a slim 22-21 lead and with the teams trading turnovers three consecutive possessions the game seemed destined for a crazy ending.

A favorable punt return for Jackson landed them at the Eagles’ 40-yard line with 5:47 remaining in the game and quickly moved to Calera’s 10 yard line in five plays.

But, again, the defense held strong and forced their final turnover on downs. The Eagles fumbled inside their own 10 on the very next play leading to Nehemiah Pritchett’s 4-yard touchdown run.

When asked about what he told Cornelius Brown before the game-winning drive, Zow responded simply: “Win the game.”

Brown went on to do just that, completing five-of-seven passes for 53 yards, including the final 10-yard touchdown pass to Quindarius Crews in the back of the end zone as time expired.

Brown finished 14-of-24 for 185 yards, two touchdowns and an interception. Crews, his favorite target, hauled in 113 yards and two touchdowns on just four receptions.

The Calera Eagles will advance to the second round of the playoffs for the second consecutive year, but will face a great test next week at the defending 5A state champion Beauregard Hornets. Kickoff is set for next Friday, Nov. 17, at 7 p.m.

TRUSSVILLE – A late run by Spain Park was not enough to avoid a season-ending, 33-21 loss at Hewitt-Trussville on... read more