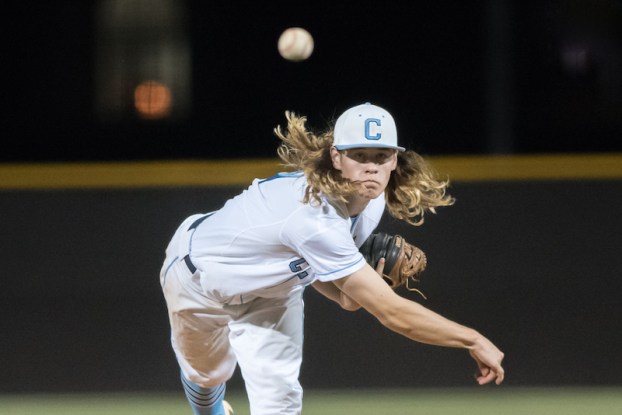 Calera's Tyler O'Clair has officially signed his letter of intent to join the UAB baseball program. The Eagle standout held an ERA of .92 last season on the mound and batted .372 at the plate. (File)

BIRMINGHAM – UAB baseball head coach Brian Shoop has announced the signing of his third right-handed pitcher in the 2018 class, Tyler O’Clair from Calera, Ala.

“We first saw Tyler in our January camp as a sophomore and we knew early on that we wanted Tyler to one day be a Blazer. He is a perfect fit in every way,” Shoop said. “While he was a catcher early in his high school career we believed that his future was on the mound.

Now that he has transitioned to the mound, he has an unbelievable upside. He is truly one of the more projectable arms we have ever signed. He is already 6’4 and still growing. He is going to be a prototype professional body on the mound. He has an easy delivery which will allow him to throw hard one day. And he will have a breaking ball to go along with his dominating fast ball. Really the sky is the limit for Tyler.”

O’Clair has been a three-year standout for the Eagles in the batter’s box, on the mound and in the field. He was tabbed the 2017 ASWA 5A Utility Player to go along with ASWA First Team Honors. As a junior he batted .372 with a .92 ERA while holding hitters to a mere .153 batting average against him which led to earning First Team All Shelby County Honors.

“We are grateful to his Calera coaches, Seth Gandy and Trey Simpson, for the way they run their program and for doing such a great job with Tyler’s preparation,” Shoop said. “We think it is really special that Tyler will be joining Charlie Clark, also from Calera High School, who has signed to play softball for Coach Amanda Ellis and our outstanding softball team at UAB.”

He participated in the East Coast Pro professional development camps and the Baseball Factory Camp. Additionally, he played summer ball for the Central Alabama Baseball Association.

Off the field he received the Character in Action Award given to Shelby County students who exhibit outstanding character in the classroom and set an example for their peers. He is also a member of the National Honor Society and Mu Alpha Theta, the math honor society.

“Tyler is also a fit academically and has qualified for an academic scholarship at UAB,” Shoop said. “We believe that he will be another Blazer baseball player to excel in the classroom.

“Tyler is amazing young man. While he is a bulldog between the lines, he is kind and caring off the field and is always looking for ways to help people. He will fit in perfectly with the outstanding young men we already have on our team. We are incredibly excited to add Tyler O’Clair to our baseball family.”

By SETH HAGAN | For the Reporter CALERA – Things looked bleak for the Eagles as Jackson’s Nehemiah Pritchett strolled... read more