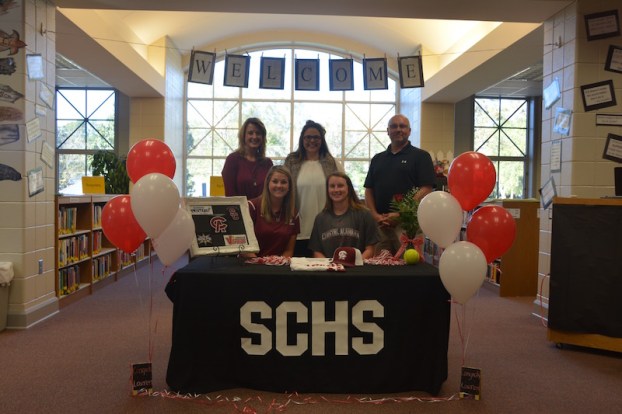 Shelby County senior Lauren Carter poses with her family and coach after signing a scholarship to attend Coastal Alabama Community College. Carter will be a senior for the Wildcats softball team this year. (Reporter photo/Alec Etheredge)

COLUMBIANA –  For her entire life, Lauren Carter has known nothing but softball, having played the game since the age of four when she was first introduced to the game.

Close to 14 years later, Carter has made so many strides and will now be moving on from Shelby County High School, where she has played all of her high school softball, to Coastal Alabama Community College to continue playing her favorite sport.

Carter made it officially at a signing ceremony in front of family and friends in the school’s library on Monday, Nov. 13, when she signed on the dotted line to join Coastal.

“It’s exciting and I don’t really know how to put it into words right now,” Carter said. “I got into the game by playing with my friends in city league and loved it, so then I started competing in travel ball and it just kind of excelled from there.”

Her storied career for the Wildcats will come to an end later this spring, but has already featured some pretty impressive accolades. During her junior season, Carter was named impressively to the All-County first team.

She was able to accomplish that achievement thanks to a season where she batted an astounding .472 at the plate. Head coach Ashley Phillips said while her offensive skillset was obvious, her defense in the outfield for Shelby County was at times “jaw dropping” in 2017, making just one error the entire season.

In heartbreaking fashion, however, her junior year was cut short. A week before the area tournament, Carter broke her leg, which was a big blow to the team’s post season hopes last spring.

It’s something Carter said would help her come back a little more determined this upcoming season.

“It’s just kind of an escape from everything,” Carter said of why she enjoys the game so much. “You’re just focused on the game and nothing else really seems to matter when you’re out there playing the sport you love.”

Now Carter gets to continue working toward getting better and playing a game she has known for so long.

She said the next step in her journey at the collegiate level isn’t one that scares her, but something she looks forward to conquering.

“I have to be competitive and earn what I want,” Carter said. “It’s an exciting challenge that I can’t wait to take on.”

Helena comes up short against Mountain Brook to open the season

By GRAHAM BROOKS / Staff Writer HELENA–In its first game of the 2017-18 basketball season, the Helena Huskies will look... read more