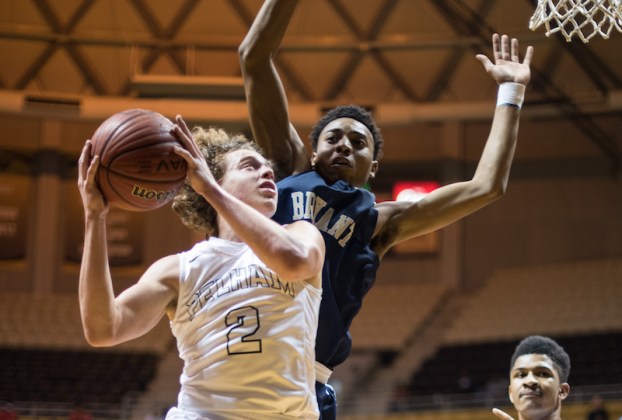 HUEYTOWN – In his debut for the 2017-18 season, Pelham’s Justin Allison didn’t disappoint scoring 31 points, which helped him join a prestigious club at the high school level—the 1,000-point club.

While the team ended up falling to Hueytown 67-46—something that not just Allison, head coach Joel Floyd and the rest of the teams want to continue—with several starters just coming off the football field and not suiting up, it wasn’t the biggest of surprises.

Allison ended up with 31 of the 46 points scored by the Panthers to bring his career total with the Panthers to 1,014 and grab that monumental milestone just one game into his senior season.

Floyd expects to see Allison’s strong play continue throughout the season and hopes to start getting his football guys like Edward Gipson and others into action with some practices as they move forward into area play at the start of 2018.

For a half of basketball, Pelham actually played well despite the amount of youth having to take to the court and the lack of depth.

Allison, along with the help of several young guys looking to earn more playing time, helped the Panthers jump out to a 12-10 lead at the end of the first quarter. The lead was sparked by a 10-0 run, which at one point gave them a 10-5 lead.

After ending the first quarter on a 5-2 run, the Gophers continued that into the second quarter eventually extending the run to 12-2 as they took a 17-10 lead.

The rest of the second quarter was back and forth, as the two teams poured buckets in on the offensive end of the floor. After a combined 40 points between the two teams in the quarter, Hueytown had outscored Pelham 22-18 to take a slim 32-30 lead into the halftime break.

The second half was all Hueytown as they took advantage of Pelham’s lack of depth and the young players on the floor. The Gophers outpaced the Panthers 17-6 in the third quarter to extend its two-point lead to 49-36.

Hueytown continued laying down the hammer in the final quarter with 18 more points, outscoring Pelham by eight. After a slow first quarter, the Gophers went on to score 57 combined points over the next three for the 67-46 win.

Allison joins his brother Zach Allison as two of the last three players at Pelham to score 1,000 points in a career, with Alex Reese wedged in between them.

Pelham fell to 0-1 on the season and meets Oak Mountain on Thursday, Nov. 16.

A tough early schedule continued for the Lady Panthers as they played their fourth consecutive game away from home against a good opponent when they traveled to Hueytown.

The Panthers were in the game in the final minute getting within one point at 38-37 with 8 seconds remaining, but two free throws by Hueytown late led to the final score of 40-37.

It was a game Pelham led by as many as five points in the second quarter and a game the Panthers controlled for much of the way. Hueytown, however, battled back to tie things up in the fourth quarter and scored five of the last seven points in the game in the final 1:27 of play to seal the win.

Pelham’s Emma McKinney led all scorers in the game with 14 points on the night.

By ALEC ETHEREDGE | Sports Editor ALABASTER – Since the age of 11, Kinsley Gardner has been drawn to the action... read more