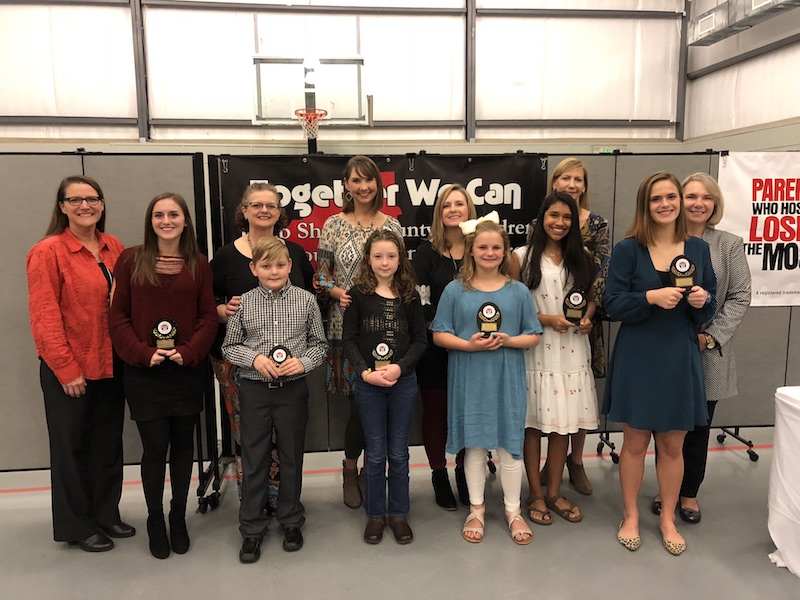 Six students from schools throughout Shelby County were recognized at the Character in Action Awards on Nov. 8. (Contributed)

ALABASTER – Six students from schools in Columbiana, Wilsonville, Shelby and North Shelby County were recognized at the Character in Action Awards at Family Connections in Alabaster on the morning of Wednesday, Nov. 8. Each student was nominated based on the way they displayed respect, self-discipline, responsibility, citizenship, friendship, fairness, perseverance and courage.

“I thought it was a really great group of kids,” Shelby County Schools Social Worker Emily Littrell said. “These kids are the ones who are setting examples for other kids at their schools.”

Shelby County High School student and cheerleader Sarah Head was referred as “an example of what a leader should be to her team and classmates.”

“Sarah has challenged herself throughout her high school career by taking the most rigorous courses offered. Her advanced level courses require her to dedicate hours of additional work outside of school,” teacher Heather Keahey wrote on Head’s nomination form. “Sarah manages to balance this workload and her extracurricular activities while maintaining the highest GPA in her class.”

“As a cheerleader, she has participated in several community events, such as a community pep rally and parades. She participated in the CMS program, ‘Writing Our Stories’ and read her very personal poem at a school-wide assembly,” Boyd wrote. “She is a student, cheerleader and SGA president who wants to be helpful and considerate.”

Elvin Hill Elementary School teachers Martha Bentley and Emily Vansant said student Nathan Beane is “a truly great example of a proactive person who focuses on controlling his own attitudes, words and reactions.”

“He takes care of his own behavior, making good choices no matter what others around him may be doing,” his nomination form read. “I have never seen him behave in an unkind or self-centered way. He is accepting of others, open to their ideas and is a caring friend.”

“She never fails to stand up for others when students are not being treated politely. She will pick things up for others when they drop things,” Hobbs wrote. “She offers to help work with students who need a partner, even when others would avoid working with them due to behavior choices.”

Shelby Elementary School student Allison Binkerd was praised for always being kind and compassionate to others.

“Allison is the first to introduce herself and welcome new friends into our school and classroom. She goes above and beyond to include them and teach them how things run at our school,” teacher Lisa Carden wrote. “She is a brilliant light shining in our classroom and children are drawn to her because of her infectious laugh and spirit.”

“I have never heard her talk negatively about someone or engage in gossip. She is always the voice of reason and isn’t afraid to stand up for others or say, ‘We shouldn’t be talking about that person.’ She shows respect to all people, students and faculty,” Henson wrote.

Littrell said each student who was selected received a plaque and a gift card. Parents were also rewarded with a certificate.

“We’re recognizing the child, but we also like to recognize the parents,” Littrell said. “The parents work hard on the home front to instill good morals. I’ve often said that a parent is a child’s first teacher.”