This week features true Amsterdam, New York cuisine and is where the cruller doughnut received its reputable nature.

Generations later lots of tasty and delicate treats are in the heart and soul of Amsterdam’s citizens and European descendants.

Amsterdam is a city in Montgomery County, New York, United States. The city currently has a population of 18,620. The name is derived from the city of Amsterdam in the Netherlands.

The first Europeans to settle there were Dutch immigrants in 1710. They called the community Veeders Mills and Veedersburgh after Albert Veeder, an early mill owner. After the American Revolutionary War, many settlers came from New England.

If you have Facebook follow Andrew M. Armstrong Recipe Columnist, then send your recipes to P.O. Box 693 Leeds, Alabama 35094 to be featured in future additions. 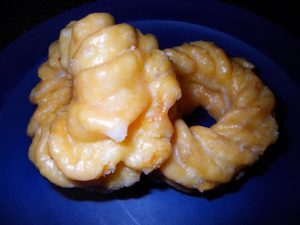 Treats like these Dutch crullers are in the heart and soul of Amsterdam’s citizens and European descendants. (Contributed)

¼ teaspoon of mace or all-spice

Cream the granulated sugar and the butter until it’s light and fluffy. Add the eggs and beat one at a time. Add the milk and at this point the batter may appear curdled. Stir the flour, salt, nutmeg and mace/all-spice into the batter. Then chill for 1 ½-2 hours. On a lightly floured surface roll half of the dough into a 16-by-8-inch rectangle and roll only in one direction. Cut the dough into 2-inch squares and do not re-roll. You may use a pastry wheel for pretty edges. Repeat with the remaining dough. Fry in deep hot oil at 375 degrees until golden brown on both sides which is around 1 minute and 30 seconds total. Once fried, dust with powdered sugar.

In a large bowl combine 2 cups of the flour and yeast. In a pan heat the milk, 1/3 cup of granulated sugar, butter and salt until warm, which is 115-120 degrees. Stir constantly, then add to the dry mixture. Add the eggs and egg yolks next while beating with an electric mixer. Beat at a low speed for 30 seconds, then scrap the bowl. Beat 3 minutes on high speed and stir in the remaining flour, raisins and candied fruits. Cover and let rise until it’s doubled in size 30 minutes to 1 hour. Carefully drop the batter by the tablespoons full into the hot oil for deep frying at 375 degrees. Fry for around 3 minutes while turning it to allow all sides to become golden brown. Drain well on paper towels or a frying rack. Mix the cinnamon and ½ cup of granulated sugar in a bowl for dusting and dust the fritters while they are still warm.

Preheat the oven at 375 degrees. In a mixing bowl pour the boiling water over the molasses, butter and brown sugar. Stir in the flour, baking soda, spices and salt. Add the egg and beat the batter until it’s completely smooth, then add the raisins. Grease and flour a 9-by-9-by-2-inch pan, then pour the batter into the pan. Place in the oven and bake at 375 degrees until done 30-35 minutes.

Recipes for the southern palate