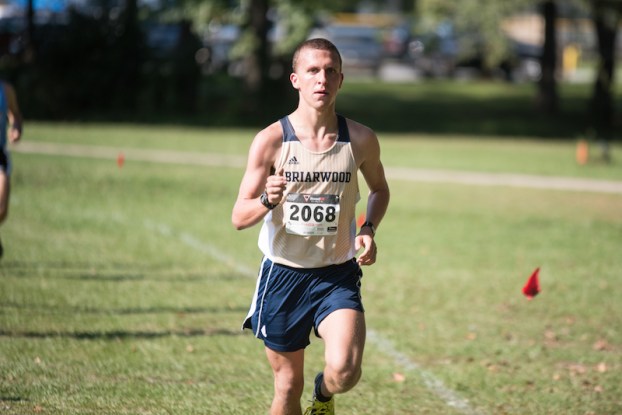 Briarwood's Zach Howard won the 2017 5A boys XC State Championship to close out a storied career with the Lions. (Reporter photo/Keith McCoy)

While both teams had solid performances finishing inside the top 10—the girls in fifth and the boys in third—there was one storyline that outshined everything else as senior boys’ runner Zack Howard closed out his storied career with the individual 5A State Championship.

It’s a career that started in 2013 as a freshman and featured 11 top 5 finishes in 23 events and four first-place finishes according to Alabamarunners.com.

After a fifth-place finish in 2016s state championship, Howard came into this year’s state meet off of a championship performance at sectionals, which gave him all of the confidence he needed.

For the second year in a row, Howard ran the state meet in sub-17 form, finishing the race with a new personal record of 16:16.17, as he won the race by a narrow two seconds over Fuad Qushair of St. John Pall II Catholic High School.

Briarwood had another top-10 finisher in promising freshman Trent Malloy, who finished in 10th with a time of 16:57.80. The time marked the second of the season that was less than 17 minutes for Malloy, as he beat his previous personal record set at the Jesse Owens Classic by two seconds.

The next highest finisher for the Lions was another senior in Wade Herren. Herren finished the race in 26th with a time of 17:36.30 to end his career.

Joseph Bell, a freshman, was another highlight for Briarwood. Bell finished in 40th with a time of 18:14.55. It marked a new personal record for the young runner, as he ran his first race in less than 19:00.

As a team, the boys gathered 109 points to finish in third place behind Saint John Paull II and Scottsboro.

While the girls didn’t have anyone finish inside the top 10, three runners did finish in the top 15. Anna Beth Hild, Adrienne Goolsby and Cady McPhail took 12th, 14th and 15th, respectively, as they stuck together for the entire race.

Hild, the lone senior of those three, finished the race in 20:29.43 to close out her career. According to Alabamarunners.com, it marked a personal record by close to 1:00 for Hild.

Goolsby finished with a time of 20:31.04, while McPhail finished the race in 20:33.42. With Goolsby being a freshman and McPhail a seventh grader, and both running new personal records; the future seems to be bright for those two.

As a team, the Lions finished with 133 points, which was one point ahead of sixth, 22 points behind fourth and 23 points behind third.