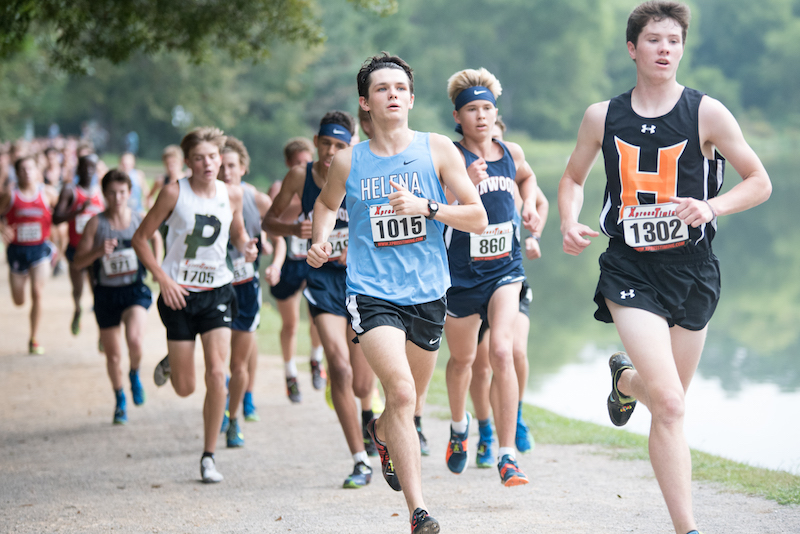 Helena's Blake Vaughn was the highest finisher in the 6A classification from the county as he took fifth place to end the season. (File)

OAKVILLE – There were plenty of highlights from the 2017 AHSAA State Championship Meet held at Oakville Indian Mounds Park on Saturday, Nov. 10, and several of those highlights came from Chelsea and Helena.

Team wise, both the Helena boys and girls advanced to the state meet, while Chelsea’s girls also made the trip after each qualified in sectionals the week before.

The highlights start with two Helena runners, one from the boys team and one from the girls team, as they had one from each finish inside the top 10.

Senior Blake Vaughn was the biggest highlight as he closed out his impressive career with the Huskies with a finish of fifth. He ran the race in 16:23.75, which according to Alabamarunners.com set a personal record in his final race.

Vaughn was coming off a stretch where he finished first, second and first, before ending his senior year with the fifth-place finish. He ended the year with three consecutive sub-17 minute races.

In his incredible career with Helena, Vaughn had 20 top 10 finishes, including five first-place finishes. He never finished lower than 15th in any of the three state championship meets.

The girls were led by a promising young sophomore in Abigail Ford, who finished the girls race in eighth with a time of 19:57.62. Ford has come on strong in her third year on the varsity program finishing first, second and second in her three races leading up to the state meet.

Ford’s eighth-place finish was her 10th top 10 finish of the season and the fifth of her career, and her time of 19:57.62 marked a new personal record as the first time she has ever run a sub-20 minute race.

Another young runner that made a statement at the state meet was Chelsea’s Teanna Cason, who has been the Hornets’ strongest runner throughout the season. Cason, like Ford at Helena, is also a sophomore and finished the race in 14th with a time of 20:10.87.

The finish marked her fifth top-15 finish of the season and set a new personal record with her first ever race finished in less than 21 minutes.

In the girls race, Helena had one other strong runner from another sophomore in Ana Watters. Watters finished the race in 29th with a time of 21:13.27, which was also a personal record for her.

Helena’s boys finished with 113 points to take third as a team, while the girls finished in eighth with a total of 242 points. Chelsea’s girls were just 16 points behind with 258, which was good enough for 10th in the team standings.