COLUMBIANA – A 42-year-old Miami man with a “very lengthy criminal history” who prosecutors said “has been deported from the U.S. on more than one occasion” is being held in the Shelby County Jail on bonds totaling $240,000 after he was charged with eight felony counts of encoded data fraud. 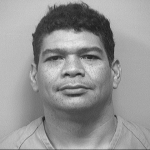 The Alabaster Police Department arrested Victor Herrera, who lists an address on 137 Southwest Avenue in Miami, on Nov. 9 and charged him with the eight felony counts.

Encoded data fraud is a Class C felony, and is punishable by up to 10 years in prison upon conviction, according to Alabama law.

Herrera’s charges came after he was allegedly found to be in possession of “identifying information that had been encoded on credit/debit/gift type cards related to 40 different victims from Alabama,” according to a Shelby County prosecutors.

In its request to raise the bond, the DA’s Office said Herrera has been charged with multiple counts of fraudulent use or possession of credit cards, possession of counterfeit payment instruments, grand theft fraud and felony failure to appear in Florida over the past 15 months. He also was a fugitive from Florida.

Herrera also is a suspect in multiple ongoing investigations for identity theft and related offenses in several jurisdictions in Alabama and Tennessee, and is under investigation for possible federal offenses, according to the DA’s office.

“The defendant is a citizen of Venezuela and in the United States and is currently applying for a Green Card, but that process is ongoing and has not yet been determined,” according to the DA’s office. “The defendant has been previously convicted of criminal offense, and has been deported from the U.S. on more than one occasion.”

Herrera is set to appear in Shelby County District Court on Dec. 6 at 8:30 a.m. for a preliminary hearing.