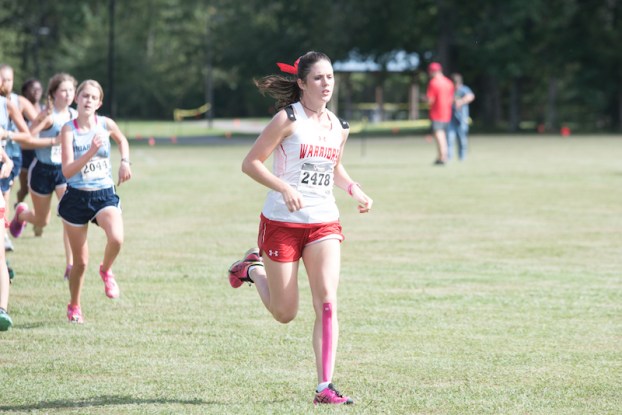 Thompson's McKenzie Hogue finished in second at the 2017 AHSAA State Championship Meet to end a strong junior season for the Warriors. (File)

OAKVILLE – Several of the best runners in the state embarked on Oakville Indian Mounds Park on Saturday, Nov. 10, for the 2017 AHSAA boys and girls 7A XC State Championship race.

The only local team from Shelby County to qualify was the Oak Mountain girls, who finished in ninth with a total of 241 points.

Beyond that, there were several impressive individual performances from runners that have been near the top of the pack all year, and it starts with Thompson’ McKenzie Hogue.

Hogue continued her dominance by finishing in second at the state championship meet with a time of 18:12.57. What makes the finish crazy is that Hogue’s goal coming into the season was to run a race in 18:00 or less.

She finished just shy of that mark in the state meet, while the winning time from McGill-Toolen’s Grace Jensen was right at 18:00.51. While that second-place finish was impressive, that is something that will fuel her moving forward into her senior season.

Nevertheless, it was still a personal record for Hogue, who capped off her junior season with her seventh top-2 finish, eighth top-3 finish and ninth top-6 finish after running in just nine races.

She finished first in three races and second in an additional four. It was a year where Hogue could have won every race she ran.

The next two highest finishers from each division came from two Spain Park Jaguar runners. MacKenzie Culpepper, just an eighth grader at Berry, finished in 10th as the second highest county 7A girls runner.

In her first year on varsity, Culpepper finished the race in 18:51.47, which easily set a new personal record. Her previous best time was 19:43.50 during the first race of the season, as she went on to finish in the top 10 of all four races she competed in.

Jacob Warner was the highest boys finisher from the county in the 7A race, as he took 11th with a time of 16:11.79. The time beat the junior’s previous personal record by six seconds.

Just two spots lower was Thompson sophomore Jace Jones in 13th, who turned up the heat in the last two weeks of the season. Jones had a three week stretch early in the season where he finished seventh, second and second, but fell outside the top 10 over the next few races.

In the sectional race against some of the toughest runners, Jones finished second again and used that to fuel a personal record running in the state championship. His time of 16:14.48 was 11 seconds better than his previous personal record set on Oct. 14.

Oak Mountain’s two runners to qualify were Bryce Keefover and Hansen McCown, and it was only fitting that the two juniors finished right next to each other in the standings.

Spain Park senior Morgan Becker was the other Jaguar runner competing in the boys race. He finished in 66th with a time of 17:10.84.

Thompson’s Brandon Lee has said he is his own biggest critic and after an uncharacteristic finish of 94th, the junior will surely use that to fuel a strong comeback in 2017. He ran the race, which had a fast pace, in 17:40.43.

Throughout the entire season, however, Lee was easily one of the county’s best runners on the boys side and one of the best runners in the state. He finished first in three races, in third once, and in the top 7 three additional times.

Outside of Hogue and Culpepper individually in the girls race, Spain Park sophomore Holland Lidikay finished the race in 46th with a time of 20:18.65.

After that was a host of Oak Mountain runners. Sophomore Evie Bell paced the Eagles as she did much of the year by finishing in 50th with a time of 20:24.10.

Not too much further down was sophomore Adrienne Cooley in 69th and senior Anna McGowan in 72nd as she closed out her Oak Mountain cross country career.