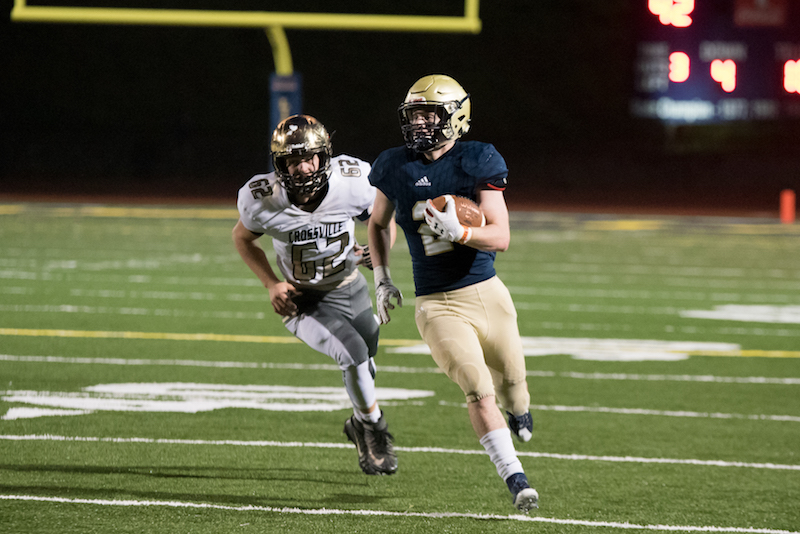 Briarwood, Calera and Thompson all advanced to the second round of the playoffs with wins on Friday, Nov. 10. (Reporter photo/Keith McCoy)

We had five teams go into the first round of the playoffs and now just three remain as we head into round two. Thompson, Briarwood and Calera all survived round one of their respective win-or-go-home clashes, while Spain Park and Pelham both lost.

The Warriors and Lions won rather convincingly by a combined 97-0 to give us two 11-0 teams in the county, while Calera escaped in a thrilling 28-27 win over Jackson that came with no time left on the clock. All that matters is that each team won and advanced to round two this Friday night.

All that really needs to be said about this game is Sept. 15, 2017. That’s when these two teams met earlier this season in a matchup Thompson absolutely dominated in a 40-13 win.

The Warriors scored on their first six drives of the game to take an easy 40-0 lead, before resting starters, which allowed Mountain Brook to make the game look a little less gruesome.

One of two things will happen when the Spartans and Warriors square off for the second time: Mountain Brook will use game one as motivation and play close, or Thompson will prove it is the better team with another dominating game.

I tend to lean toward the latter. Thompson has already proven they can handle this defense and with Spartans’ star running back Harold Joiner battling injuries, they’re having to rely too heavily on Hamp Sisson at quarterback.

With Thompson’s offense already playing lights out, the Warriors’ defense stepping up to post its first shutout of the season in the first round of the playoffs shows this team is ready for this postseason run.

The Warriors will continue this historic season as they advance past the second round of the playoffs for the first time since the 1987 season and to the semifinals for just the third time in school history with another statement win. Thompson 42 Mountain Brook 17

Not many teams in the state looked more impressive than Briarwood in the first round of the playoffs as the Lions posted possibly their best performance of the season in a domineering 62-0 thumping of Crossville.

It’s a game Briarwood led 55-0 at the end of the first half thanks to an offense that clicked from the first play of the game, and a defense that posted its second shutout of the season.

Briarwood is now giving up just 8.6 points per game on the defensive side of the ball through 11 games, which is tops in the state. The offense has started clicking as well and is now scoring 33.2 points per game.

While the Generals have only given up more than 20 points on four occasions this season and never more than 23, Briarwood should be able to become the fifth team to do so, which is all they need with the defense the Lions put on the field.

While it could be a defensive battle early on due to the Generals giving up just 12.6 points per game, I expect the Lions to make their presence known and eventually win by at least 14 points. Briarwood 28 Lee-Huntsville 10

It took a miraculous ending for Calera in round one as quarterback junior quarterback Cornelius Brown found sophomore wide receiver Quindarius Crews as time expired to win 28-27 over Jackson.

Round 2 may take a bit of extra effort, especially after the emotions of last week’s win. Maybe that will spark them and give them a new life heading into Friday night’s matchup against Beauregard.

Beauregard, who has now won nine straight games, is considered the No. 3 team in the 5A classification and a heavy favorite in this game. The Hornets’ only loss of the season came in Week 1 to Greenville 34-21, but in the first round of the playoffs a week ago, they got redemption in a 23-20 win to advance.

Calera has as talented an offense as anyone when they are clicking thanks to guys like Brown, Dee Mickens, Tyler Agnew, Crews and others. They’ll need every bit of that talent to step up in the first round to keep up with this Beauregard team that is scoring 42.2 points per game.

If the Eagles play a complete game like they did against Dallas County, Sumter Central, Jemison and Marbury, they will pull off the upset. They could have beaten several good teams like Mae Jemison, Demopolis and Jackson-Olin had they played more consistent.

I expect them to put it all together and play their best game of the season, using some of the things I’ve said as motivation, but it’s hard to go against this Beauregard team that has won nine in a row. Calera 31 Beauregard 41