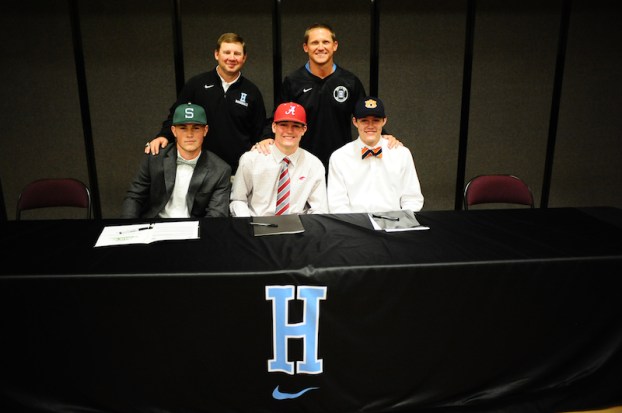 HELENA–The Helena High School baseball program can add three more accomplishments to a growing list of things the program has been able to achieve in just a few short years, as three players inked collegiate scholarships at a signing ceremony on Thursday, Nov. 9.

The trio of juniors all played a part in helping Helena win its first state championship in program history and each one will try to help their respective teams at the collegiate level.

As a junior, Green was 11-0 this with one save and also came in clutch during the state championship series with Cullman. He posted an ERA of 1.44 for the Huskies as well and struck out 44 batters in just 48.1 innings pitched.

Ragsdale held an average of .333 with 34 RBIs after hitting 10 doubles and four home runs and Fitts posted impressive numbers on the mound for Huskies during their junior campaigns.

Helena assistant coach Bobby Cummings coached the three players while they were playing at the middle school level, as well as in high school, and said it was an honor to see them mold into the people and players they are today.

“Getting into the profession to be successful and win games, it’s taken six years of hard work and watching these kids grow up from middle school kids as sixth graders in the gym and having to tell them to sit down three times to where it’s a dream come true,” Cummings said. “You see these guys and the other guys sitting in those chairs to be well-spoken, respectful, humble, hard-working, Christian young men who represent themselves, their family and this community in nothing but a first-class way and that in it of itself is what true winning and what this is all about. This for me is really a dream come true to see these guys and their teammates compete and win every single day and that’s what winning is.”

Each player took to the podium to thank coaches and family members that have helped them get to where they are today and a reception with food and refreshments rounded out the signing ceremony.

All three players will play key parts in 2018 as seniors to help Helena reach the Class 6A state championship once again before they embark on a new journey at the collegiate level.

By ALEC ETHEREDGE | Sports Editor OAKVILLE – There were plenty of highlights from the 2017 AHSAA State Championship Meet held... read more