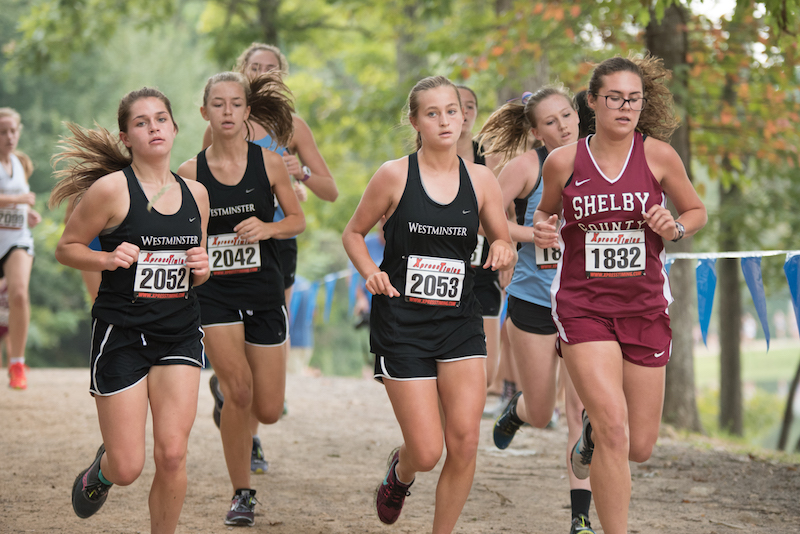 Both the Knights’ boys and girls cross country teams qualified for the event after winning their sectional races and both teams continued their winning ways in the biggest event of the season picking up two more state championships for the school.

The boys and girls both had runner-up finishes in 2014, while the girls were runner-up in 2015 as well. Now, in 2017, both have state championships.

It marked a repeat title performance from 2016 for the girls, who have now finished in the top 2 the last four years. The boys on the other hand picked up their first state championship in school history.

Both teams had three finishers inside the top 10 of the individual standings. The girls ended up with five in the top 15, while the boys had four in the top 15.

The girls were led by Hallie Porterfield in third. Just a freshman, Porterfield finished the race in 19:34.46, which was 12 seconds off the pace of the championship time. It marked just the second time she had run a sub-20 time as she beat her old personal record set in the sectional race by 25 seconds.

Seventh grader Katie Wright was the Knights’ fifth top-20 finisher with a time of 21:42.64.

As a team, the Westminster girls finished with a total of 32 points, which was 69 points higher than Hatton and St. Lukes’ Episcopal in second with 101 points each.

The Knights’ boys squad was led by senior Nate Collins. In his last race for the school, Collins finished in second with a time of 16:15.74, which beat his previous personal record of 16:44.66 by close to 30 seconds.

Hunter Wright gave Westminster a second top-5 finisher, taking fifth on the dot. Wright, a freshman, finished the race in an astounding 16:42.62, which was also a new personal record for the young runner.

Junior John Porterfield was the last top-10 finisher for the Knights in ninth, while fellow junior Cooper Reynolds finished one spot outside of the top 10 in 11th.

Reynolds previous fastest time was 18:40.38, meaning he beat that record by almost 1:30 and ran his first ever sub-18 race in the state championship.

Seniors Daniel Collins and Pierce Moffett also had strong showings, finishing in 18th and 21st, respectively. Collins finished with a time of 17:56.20, while Moffett ran the race in 18:08.99.

The boys finished with a total of 43 points, which beat Cold Springs by 34 points and Altamont by 35 points.