Boys save toddler from swimming pool 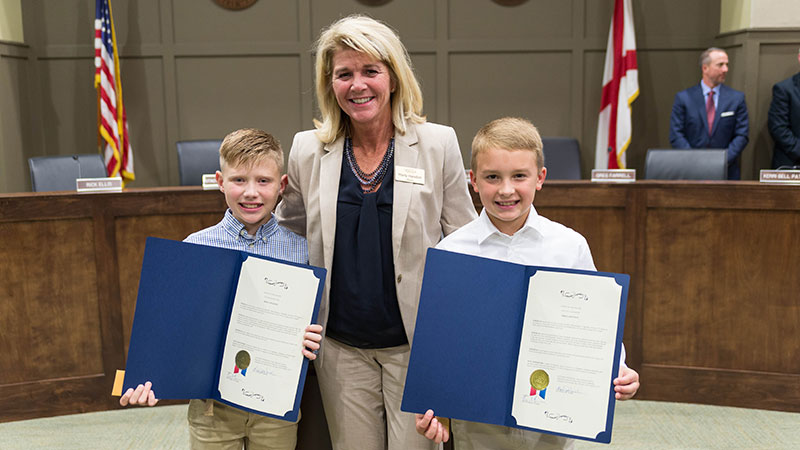 ALABASTER – Ten-year-old Cooper Fuller and 8-year-old Kade Brantley didn’t hesitate for a moment when they saw an 18-month-old toddler fall into the deep end of a swimming pool during a birthday party at a local residence on Oct. 15.

“When we first noticed him, we tried to get to him by kneeling down and reaching from the side of the pool,” Kade said while recalling the incident, noting he and Cooper were the first to witness the baby fall into the pool.

When they were unable to reach the toddler from the side of the pool, Cooper immediately jumped into the swimming pool to save the victim from drowning by pushing the baby toward Kade, who pulled the child out of the water. After the toddler was safely out of the water, the boys alerted adults and took steps to calm the baby.

“We are very proud of them and the actions they took. They knew exactly what to do,” said Kade’s father, Chip Brantley, the city’s fire marshal.

“I’m just glad he knew what to do, because nobody else saw him (the baby) fall in,” said Cooper’s mother, Nicole. “Everything turned out well, and he was fine.”

For their actions, the two boys earned recognition from Alabaster Mayor Marty Handlon during a Nov. 13 City Council meeting. Handlon presented both boys with mayor’s challenge coins and proclamations bestowing them with the “hometown heroes” title.

“A near tragedy was avoided due to the courage and quick action of these two young men,” Handlon said. “Their bravery demonstrated a maturity beyond their years.”

The boys also earned praise from members of the City Council.

“That was very brave, and we are very proud of you,” said Ward 3 Councilwoman Stacy Rakestraw.