Chelsea falls by 3 in back-and-forth battle with Rockets 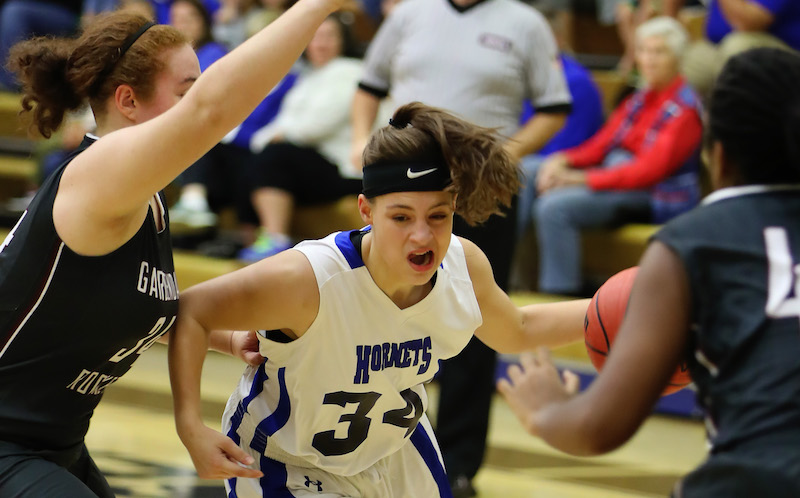 Chelsea’s Michaella Edwards posted a game-high 30 points in the game, while Jordan Parker had nine and Hope Richard added eight. (For the Reporter/Cari Dean)

CHELSEA – After dropping its first game of the season on the road at Vestavia Hills on Thursday, Nov. 9, Chelsea returned home on Tuesday, Nov. 14, for the home opener against the Gardendale Rockets.

Thanks to three late 3-pointers from Gardendale guard Preslie Ross and Candace Paris, the Rockets were able to come from behind for a 56-53 win to spoil the Hornets’ homecoming as they fell to 0-2 on the young season.

While the game was never in favor of one team heavily, the sparks and excitement came in the fourth quarter.

Chelsea, who had trailed much of the game, grabbed a 40-37 lead heading into the fourth quarter.

The Hornets eventually extended that lead to five, 46-41, midway through the final period, but this is when Gardendale turned up the pressure.

The Rockets went on a 12-1 run sparked by those back-to-back-to-back 3-pointers from Ross and Paris, as they took a 53-47 advantage.

Thanks to several missed opportunities at the free throw line by Gardendale, and a steal by Michaella Edwards for an easy layup, Chelsea was able to get within three at 56-53.

Sitting in a one-and-one situation at the free throw line, Gardendale missed three straight opportunities on its first free throw attempts, giving Chelsea several chances to tie or even win the game.

The Hornets couldn’t capitalize, however, as one of the opportunities ended in a turnover and the other saw an Edwards 3-pointer hit the front of the rim as time expired.

Gardendale came out looking like the better team to start the game as well, grabbing a six-point, 14-8 lead at the end of the first quarter.

Quarter two saw a little more fight from the Hornets, however. Edwards got to the line for two free throws and drained them both to cut the Rockets’ lead to four points.

Edwards then proceeded to grab the rebound on other end and bring the ball the length of the floor before giving off a perfectly executed wrap-around pass to Pressley Rains for the easy layup to make the score 14-12, as the Hornets got off to a quick 4-0 run in less than a minute of the period.

Gardendale went on to answer that spurt with one of its own. A quick 5-0 run gave the Rockets a strong 19-12 lead. They eventually gathered a 21-14 lead, before the Hornets went on another 6-0 run to get within a point at 21-20.

The run was sparked by an Edwards 3-pointer and several offensive rebounds by her and Jordan Parker.

In a quarter of runs, the rockets came right back with a 6-2 run to end the second period as they took a 27-22 lead into the half.

Coming out of the break, Gardendale extended that run to 8-2 as they took a 29-22 lead. Chelsea then found some offensive rhythm to claw back into the game.

Due to several big plays from Edwards and Parker again, the Hornets cut the lead to one at 29-28. Shortly after, a layup from Rains gave Chelsea the lead at 30-29.

The two teams traded baskets back-and-forth the rest of the quarter with Gardendale hitting several key 3-pointers to kill several Chelsea momentum builders, but thanks to a Parker layup and a Hope Richard jumper late, the Hornets were able to take a 40-37 lead into the fourth quarter.

The Hornets outscored the Rockets 18-10 in the quarter thanks to 12 combined points from Edwards and Parker. Chelsea continued that trend early in the final period before Gardendale eventually sealed the game late thanks to those crucial 3-pointers.

Edwards ended the night with a game-high 30 points to lead the Hornets. Parker nine points of her own, while Richard poured in eight.

The Rockets were led by Paris, who hit three deep balls on her way to 15 points. Ross ended the night with nine points, all of which came on 3-pointers.