Hornets use depth to pick up first win 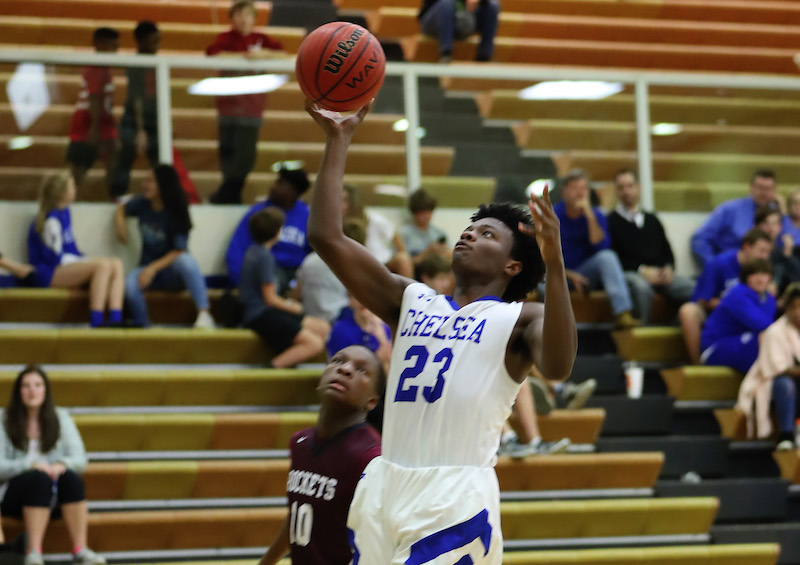 Tyler Coleman led Chelsea with 19 points in the game after making several big plays in the game. In all, 10 different players scored for the Hornets on the night. (For the Reporter/Cari Dean)

CHELSEA – A total of 10 players scored and 12 saw significant playing time as the entire Chelsea basketball team pitched in for a dominating 61-38 win over Gardendale in the Hornets’ home opener on Tuesday, Nov. 14.

Chelsea was coming off a tough 62-49 loss to Vestavia, a team that made it to the Final 4 a year ago, but rebounded with a strong defensive effort from all 12 players and 19 points from Tyler Coleman in the win.

“We concentrated on our defense just a little bit more and I thought it paid off tonight,” head coach Nick Baumbaugh said. “I thought our defensive pressure was much better than it was last week.”

That defensive effort started strong in the opening quarter of play as the Hornets limited Gardendale to just four points in the period. Offensively, Coleman started fast as well, taking the opening tip into the paint and laying the ball in plus the foul to give Chelsea a quick 3-0 lead.

Coleman came right back on the next possession with a breakaway layup to give him the team’s first five points of the game. Shortly after, Matthew Lanzi got in on the action with a 3-pointer to give the Hornets an 8-2 lead.

Turner Griffin extended the lead right at the end of the quarter with a deep 3-pointer to give the Hornets a 12-4 advantage.

Both sides of the ball continued their stellar play for the Hornets into the second quarter.

For much of the period, Gardendale was visually frustrated by the pressure that Chelsea was throwing at them, while Lanzi came out and hit four consecutive free throws to start the period, which extended the Hornets lead to 16-5.

Chelsea was eventually able to grab a 13-point lead at 20-7 thanks to three points in a row from Cole Glandon and a free thrown from Josh Hanna, continuing the trend of several different players pitching in.

After a strong post move by Daniel Washington and two Coleman free throws, Chelsea held a strong 15-point lead at 26-11, before the Rockets hit a layup at the buzzer to make the score 26-13 at the half.

In all, seven different players scored in the first half.

“We’ve got 12 kids that can play,” Baumbaugh said. “It’s really hard to find which five to put on the floor because they all know what to do. We haven’t had that in a long time. I’ve had some good teams, but this is probably the deepest team I’ve had in a long time.”

Coleman came out and started the third quarter almost hotter than the first minute of the opening period. He knocked down a quick 3-pointer right out of the gates, before getting the ball two possessions later and driving to the rim for an easy layup.

After a rebound by Coleman on Chelsea’s fourth possession of the quarter, he pushed the ball up the floor and into the paint, before kicking out to Nyles Macon for a wide open 3-ball. His strong run to start the quarter ended on a 3-pointer just two possessions later.

All of that strong play from Coleman led to the Hornets busting open the game with a 38-15 lead early in the third quarter.

The Hornets went on to score 11 more points in the quarter to Gardendale’s 10 as Chelsea took a 49-25 lead into the fourth quarter of play.

For the third time in four quarters, Coleman started the scoring in the final period with a breakaway easy layup. He followed that up shortly with back-to-back steals before making 1-2 free throws after being fouled on both.

“He did a great job for us,” Buambaugh said. “We weren’t really expecting that, but very pleased with him. I challenged him in practice yesterday and he responded really well.”

His stellar play led to the Hornets grabbing a 53-27 lead, one they wouldn’t come close to relinquishing as Chelsea picked up the easy 23-point win to improve to 1-1 on the season.

Behind Coleman, Lanzi scored in double figures as well posting 10 points in the game. Glandon and Washington added seven and six points, respectively.