A radio station in Montevallo has avid listeners around the globe who tune in on Sunday morning to hear “Sunday Morning Coffee” with Gilbert Stevens. 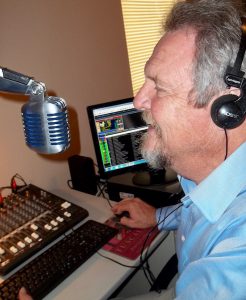 For the past five years the miracle of computing, coupled with an Australian company’s software, has made the Sunday morning show a regular thing. From his Montevallo home, DJ Stevens uses a mixing board, an “Elvis microphone” and a Windows10 operating system to take his collection of ’50’s, ’60’s and ’70’s rock, country and Motown music on a world tour.

Oh, and “Gilbert Stevens”? You probably know him by his alter ego, Steve Gilbert, executive director of the Montevallo Chamber of Commerce.

Gilbert majored in mass communications at the University of Montevallo and then worked at WBIB in Centreville. He moved on into cable television while continuing to pick up gigs as a DJ at dance clubs, private parties, weddings and class reunions.

Anyone who has attended the annual Cars by the Creek in Montevallo has experienced Gilbert’s melding of his two favorite hobbies—classic cars and music. The theme continues with his station’s spot on the web: www.cartunesradio.com

Programs travel from Montevallo via another miracle of the digital age: SHOUTcast. This means of streaming audio allows Gilbert Stevens to broadcast to his fans in Winnipeg and Portugal and South Korea and Belgium simultaneously. A home computer with a few gewgaws becomes a global radio station—sweet, eh?

From (not a native English speaker in) Belgium: “Dear Radio Friends, I’m an affectionado to your radio! Already for years I put it on in my living room and enjoy every single minute of it! So even in the hellhole of Brussels (I didn’t say that) Car Tunes Radio scares the devil and lets the angels in… thanks for that! Keep up the excellent work! Kind regards. Rob.”

That shout-out was from “Diane” in Portugal.

You just never know from whom you may hear in this business.

During those live two hours (from 8-10 a.m. Sundays), Gilbert is one busy man. While he is working his magic on the mixer, one computer and his mic, he also is responding to questions and comments on “Live Chat” via the station website on his second computer.

You actually can listen to the Montevallo station 24 hours a day, seven days a week and contact Gilbert on Facebook. Gilbert devised an awesome compilation of playlists accessible all day every day.

When you access the daily playlist or the show’s archives, you can thank Gilbert’s friend and collaborator, Bill Levey of Cahaba Internet. Levey records the programs and archives them so you don’t have to miss church to enjoy “Sunday Morning Coffee.”