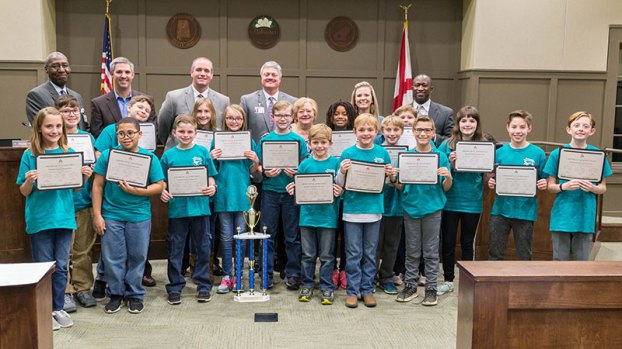 “All of our students worked incredibly hard,” Richardson said. “Events range from hands-on, paper/pencil assessments, individual, and partner activities. At this competition ribbons were given for First, Second and Third place in each event.”

A total of 24 students attended the competition, which is comprised of fourth, fifth and sixth graders.

TIS is fourth and fifth grade students, but students from the Sixth Grade Center walk over to TIS for Science Olympiad practice each day.

Students who are on the Science Olympiad team commit to studying and practicing several hours each week, and during weekly practices they work with their partners on what they have studied or practiced.

Richardson said some examples of things the students work on include write it/do it-partners are placed in separate rooms where one partner looks at a model and describes it as detailed as possible.

The student is under a time-limit and typically they are not allowed to use color words such as “strawberry” for the color “red.”

“Their description is then handed off to their partner, and the partner must build a model based off that description,” Richardson said. “Cool-It Students are given a bag with various items. You don’t know what items you will have to work with until you are in the competition. Students then create a device to keep an ice cube solid for a given amount of time. Liquid water is then measured.”

Richardson said a common enjoyment during competition time with students in the Science Olympiad team is eating in the cafeteria with other students, but this year the students really enjoyed winning the competition.

“Seeing, experiencing, and hearing the pure joy and exhilaration from my students and from the parents who attended with us that day was the most rewarding part of the competition,” Richardson said.

Students that competed were:

A list of awards with each student include: “No Bones About It,” First place, Kaitlyn Deason and Drew Lowrey; “Water Rockets” -Third place, Dia Montiel-Duenas and Benny Schmidt;“Solid, Liquid, or Gas” Third place, Braxton Franklin;

By NEAL WAGNER / Managing Editor ALABASTER – The Alabaster Board of Education took another step toward opening the... read more