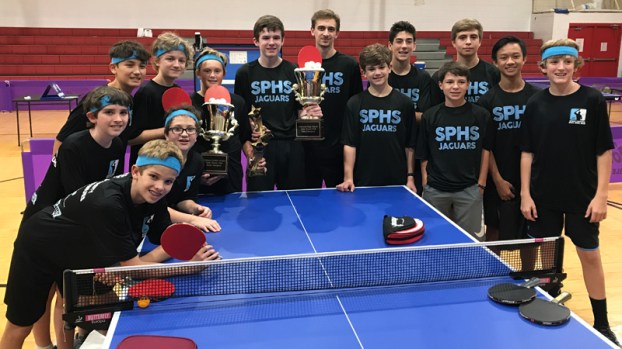 HOOVER – Berry Middle School has dominated the fledgling sport of table tennis in Alabama, but as it grows in popularity, the team has work to do to continue its championship dynasty.

Zach Gray, a seventh grader competing in his first state tournament, said players understood they are continuing a winning tradition.

“I was kind of nervous especially with the pressure that comes with that,” Gray said.

Berry coach Shane Shelnutt has taught table tennis in physical education classes for all of his 22-year tenure, he said, and has long been a fan of the sport.

About eight years ago, the Hoover business BumperNets hosted a state championship tournament. Though the tournament was designed for high school teams, middle school teams were allowed to participate.

Berry’s team was competitive, and by the tournament’s fourth year, the Jaguars had won the state championship.

For the next tournament, the teams were split into high school and middle school divisions, and Berry has won championships all three years under this format.

As many as 14 high school and middle school teams combined have participated in the tournament, which for the past few years has been held in Trussville.

Berry and Spain Park students have taken their interest in the sport beyond the recreational level.

An example is Ben Hartwiger, the Most Valuable Player for Spain Park’s state championship team.

Shelnutt remembers an unimpressive Hartwiger trying out for the Berry team his sixth grade year and not making the cut.

But Hartwiger stuck with it.

He asked for a Robo-Pong machine for Christmas, which shoots out balls much like a baseball pitching machine, allowing him to practice without a partner. And during his seventh grade year, Hartwiger won a school-wide tournament.

His progress in the sport has continued, as he is one of the top junior players in the country and has had the opportunity to play in various high-level tournaments, including one in China.

“He has taken it to the next level,” Shelnutt said.

The MVP of the middle school division was Sam Wasko. The MVP is always a player competing at the No. 1 level, and is based solely on the player’s record against other No. 1’s in a round-robin format.

An advantage for Berry’s program is that the school has enough tables to be able to make table tennis a unit during physical education classes. So, every student at the school is exposed to the sport for a 10-day period.

However, more schools are recognizing the opportunity and investing in table tennis, Shelnutt said, which has been made apparent during more competitive tournaments.

The team practices every Thursday morning at the school, and then on Friday nights, BumperNets hosts a junior tournament that Berry players often compete in.

Seventh grade player Taylor King said he prefers table tennis to other sports because the action is constant.

Shelnutt said one of the reasons for his interest in table tennis is that it provides an outlet for students who might not compete in other sports.

It is also an opportunity for travel and an introduction to other cultures.

Shelnutt has taken the table tennis team to the Westchester Table Tennis Center in New York, which hosts the largest club tournaments in the United States.

The coach also said table tennis has a relatively low cost to participate. For about $150, a player can have equipment as good as what professionals use.

“We’re trying to grow the sport,” he said.