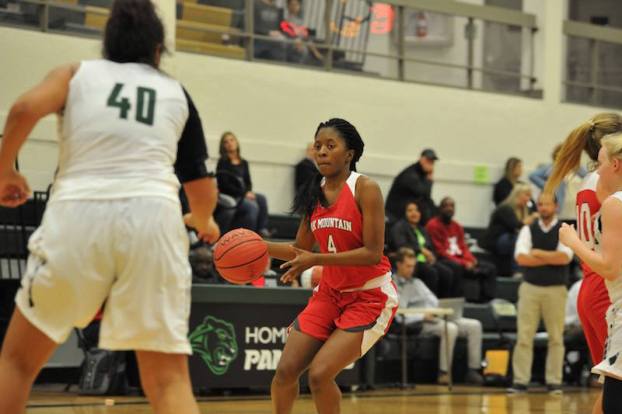 Kailey Rory continued her hot start to the 2017 season with 13 points in a win over Pelham. She has helped lead the Eagles to a 4-1 start to the season. (For the Reporter/Larry Dancy)

PELHAM – Oak Mountain used a strong fourth quarter defensively forcing eight Pelham turnovers in the final frame to pick up a 40-24 win on the road over the Panthers on Thursday, Nov. 16, to move to 4-1 on the season.

The Eagles were up by just two at 17-15 near the end of the third quarter, but ended the quarter on a 6-1 run to take a 23-16 lead and continued that confident play in the final quarter, giving up just eight points the rest of the game.

“We shot it a little better and ran offense a little better in the fourth quarter,” Oak Mountain head coach Allen McGowan said. “We also changed our defense to a three-quarter court press and that changed things for us defensively and helped us out.”

The Panthers eventually clawed back within two points at 24-22 in the early going of the final quarter thanks to back-to-back post buckets from Emma McKinney.

Kennedy Smith put an end to that real quick for the Eagles when she took a strong move into the paint for an and-1 basket to give Oak Mountain a 3-point play.

Smith went on to score six more points in the quarter, all from the free throw line, as she scored all nine of her points in the final quarter. Her free throws along with others led to the Eagles ending the game on a 16-2 run to win by the final of 40-24.

“It was actually the defense that led to that run and helped us free things up a bit,” McGowan said. “Just that changing up of the pressure up front kind of changed things for us.”

While the game ended with an offensive spark for Oak Mountain, it was a defensive battle by both teams in the early going.

The two teams combined for just 22 first-half points with the Eagles taking a 12-10 halftime lead. All 12 of those points in the first half for Oak Mountain came on 3-pointers.

Kailey Rory hit two of them and was responsible for half of the team’s first-half points with six.

“Offensively, we’re struggling a little bit,” McGowan said. “So we’ve got to keep working to get better and get used to playing with eachother all over again.”

The second half was much more eventful for Oak Mountain, however, as they posted 28 points.

A big reason for that success was the Eagles shooting 11-15 from the free throw line in the fourth quarter alone.

Rory and Scout Reed ended the night with 13 points apiece to lead the Eagles in the win. Oak Mountain hit seven 3-pointers in the game, six of which came from Rory and Reed.

Pelham was led by 10 points from McKinney and eight additional points from Jamila Wilson. The Panthers fell to 2-4 after the loss, which marked their first home game of the season.

By SETH HAGAN | For the Reporter VESTAVIA – A young Helena basketball team fought hard on the road, but... read more