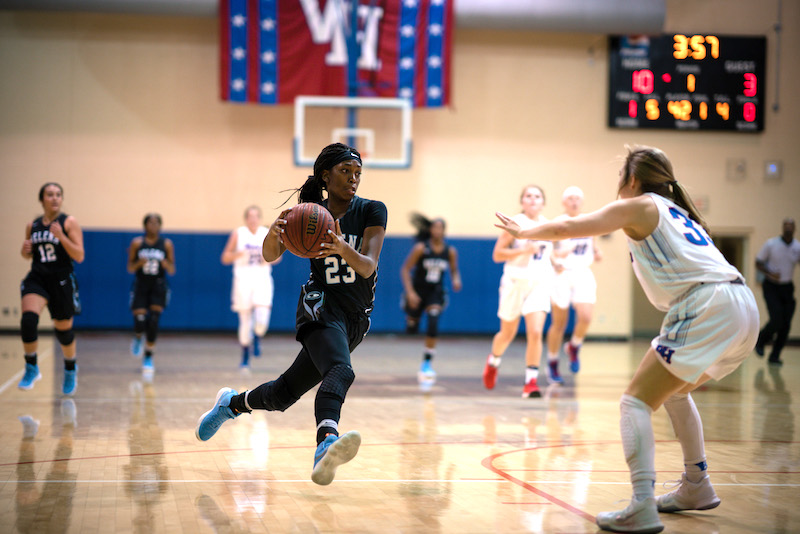 Jordan Jones ended the night with more than half of Helena's points as she posted 14 in the loss. (For the Reporter/Adam Lee)

VESTAVIA – A young Helena basketball team fought hard on the road, but ultimately Vestavia Hills proved to be too much for the Huskies and handed them their second loss of the season, 55-27.

The Rebels used great half-court defense and a dominant inside game at home as they improved to 5-1 on the season with their fourth win in a row.

Vestavia Hills came out firing in the first quarter scoring and raced out to a 21-10 lead off 10 baskets, while forcing eight turnovers.

The second quarter looked to be more of the same, as the Rebels went on an 11-0 run over the first five minutes.

Finally, Helena caught it’s second wind. Over the final three minutes of the second period, the Huskies went on a 12-5 run featuring scores from six different players to close the deficit at halftime to 38-22.

“We got a little momentum coming out of the second quarter, and I think coming into the second half we just came out trying to snatch everything back all at once,” Helena head coach Alan Skinner said after the game. “You just can’t do that you have to be patient and we were not at all.”

Baskets were hard to come by the rest of the way, as Vestavia Hills outscored the Huskies 13-2 in the third quarter to take a decisive 53-24 lead. The Huskies added just three points in the final quarter, while Vestavia posted just two to create the final score.

The Rebels were led by junior Grace Uldrich’s 21 points, while Anna Wood and Emma Smith chipped in 12 and 11 points, respectively.

Senior Jordan Jones scored Helena’s first eight points of the game and finished with a team-high 14 for the game.

“She’s one of two seniors we’ve got. She’s been there, she’s been in the battles and she knows what it takes to win games like this,” Skinner said.

The Huskies now sit at 1-2 and will compete in the Bryant-Bank Invitational hosted by Hewitt-Trussville High School over the Thanksgiving break.