Huskies move to 2-0 with win at Vestavia 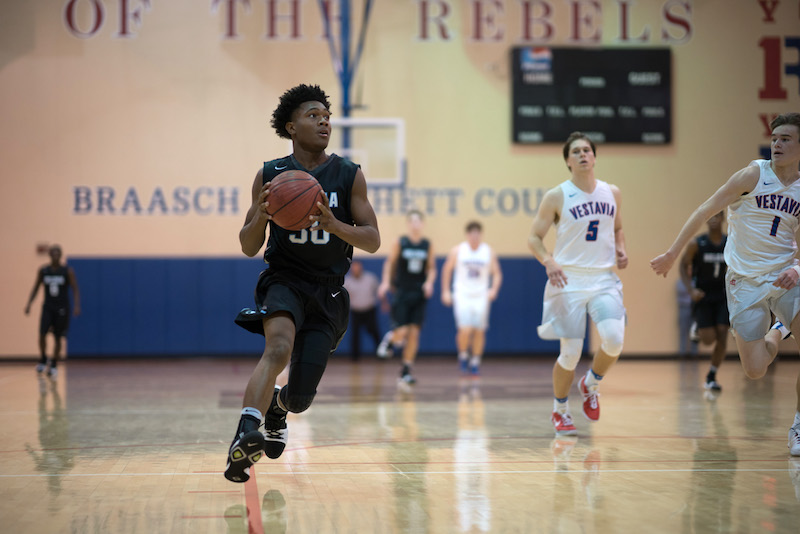 Helena's Daunte Cave ended the night with nine points after going 4-4 at the free throw line in the final quarter. (For the Reporter/Adam Lee)

HELENA – The Helena Huskies paid a visit to the Vestavia Hills Rebels for a Thursday night game dripping in a playoff atmosphere—in mid-November.

The contest featured two ties and 10 lead changes, but in the end Helena (2-0) escaped with a road win over Vestavia Hills, 63-59.

Despite the height of the Rebels’ front line, the Huskies were able to gain the rebounding edge inside. Senior Devan Tucker created extra opportunities for himself and his teammates crashing the offensive boards time and again on his way to a double-double.

Helena head coach Chris Laatsch gushed over Tucker who’s taken a journey to get to this point.

“Just so proud of him, he’s a senior that’s come so far. He’s matured and grown so much and I thought he played extremely hard,” Laatsch said. “He was on the floor with some inexperienced guys at times and he held them together and just couldn’t be happier for a team-first guy like him who’s worked as hard as he has to have the night that he had.”

Tucker scored six of his 10 points in the first quarter, two off of one of his many offensive rebounds.

His hot streak was rivaled only by Vestavia’s Scott Morrison who was unconscious in the first quarter hitting four of his first five 3-pointers. He ended the night leading all scorers with 21.

The Rebels took a slim 14-13 lead into the second quarter before a back-and-forth affair of lead changes took place. Eventually, Vestavia took command of the quarter as they headed into the half with a confidence-boosting 11-3 run.

Scott Morrison’s five first-half 3-pointers made up over half of Vestavia’s 27 points in the half, but it was rough sledding the rest of the way for the senior.

Helena ruled from beyond the arc in the third quarter. Nate Andrews led the team in scoring and hit two of the Huskies’ four threes in the period.

After three more lead changes, Helena took the lead for good with an electrifying 11-0 run heading into the final 8:00 of play.

The fourth quarter wasn’t short on drama as both teams fouled into the double bonus and free throws rained down relentlessly. A total of 29 shots in all came from the charity stripe down the stretch and Helena came close to needing every last one.

The game seemed in hand as the Huskies took their biggest lead, 57-45, midway through the fourth, but Vestavia senior Luke Champion finished with a flourish to keep the Rebels within shooting distance.

Champion scored 14 of his 18 points in the last four minutes, including two 3-pointers and all six free throw attempts.

The Huskies answered the call, however, hitting 12 of their final 14 chances at the stripe to preserve the win.

“We didn’t shoot them well Tuesday night and we brought them in early Wednesday morning to shoot a bunch of free throws, shot a lot today and I think it paid off,” Laatsch said. “Our kids stepped up in a really big game and really big moments and knocked them down tonight.”

Helena will look to stay undefeated as they travel back to Vestavia to take part in the Sneaky Pete’s Classic over Thanksgiving break.