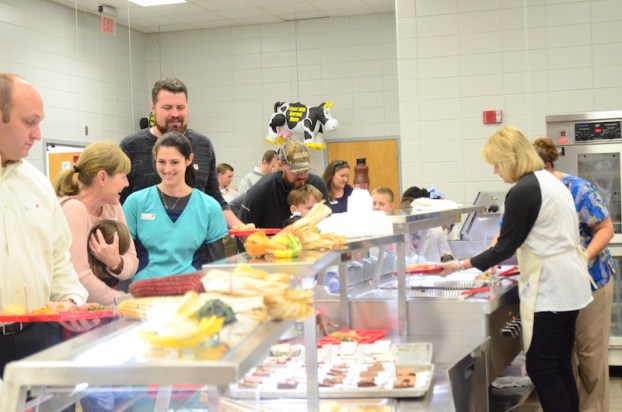 MVES gives thanks at lunch

ALABASTER – During the week before Thanksgiving, students and their families gathered in the Meadow View Elementary School cafeteria for a special lunch to celebrate the holiday. The lunch for kindergarten and second grade students was held on the afternoon of Wednesday, Nov. 15. The lunch for first and third-graders took place on Friday, Nov. 17.

According to MVES Principal Rachea Simms, the lunch gave students another opportunity to have quality family time while also reflecting on what they are thankful for this week.

“This is really to involve our families and our community,” Simms said.

Simms said the lunchroom staff did a fabulous job of preparing the meal, which consisted of traditional Thanksgiving foods including turkey, gravy, dressing, cranberry sauce and sweet potato casserole. According to Simms, the dressing was so popular among parents that the lunchroom staff began taking orders.

“Our lunchroom staff works hard to prepare this,” Simms said.

During the dinner students discussed what made them thankful this holiday season. Many students said they were thankful for their talents and the people in their lives who support them.

“I’m thankful for my family, because they do special things and they buy me stuff,” said third-grader Kayla Ratcliff, who also said she was glad to be a dancer.

Third-grader Azul Zapala-Cortes also said she is grateful for her family, “because I love them,” and first grader Addison Wilford said she was especially thankful for her grandmother, who was in attendance at the lunch.

Other students simply said they were thankful for the basics of life, like their faith, freedom and homes.

“I’m thankful for my family, and I’m thankful that we all have food and water and other things to live,” third-grader Faris Salameh said.

“I’m grateful for food,” third-grader Sailor Higgins said, “If we didn’t have food, we would all starve.”

“I’m thankful for God, because he’s the one who created us,” first-grader Connor Morrison said. His 2-year-old brother, Jaxon, also said he was thankful for their family.