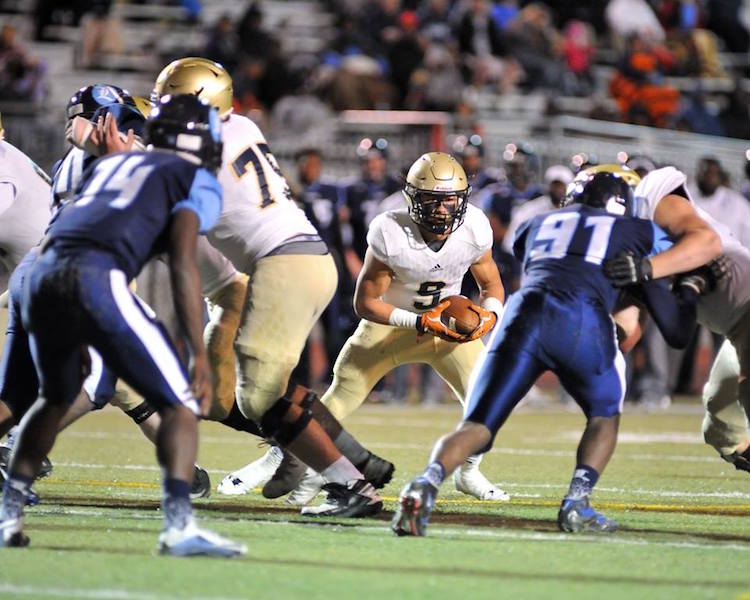 Briarwood scored five touchdowns in a 35-14 win over Lee-Huntsville and all five come from junior running back J.R. Tran-Reno. (For the Reporter/Larry Dancy)

HUNTSVILLE – It was the JR Tran-Reno Show Friday night at as the junior running back rushed for five touchdowns to lead the top-ranked Briarwood Christian Lions to a 35-14 victory at Lee-Huntsville in the second round of the AHSAA Class 5A playoffs. Tran-Reno led the Lions with 114 yards rushing on 26 carries.

“I’m real tickled these guys stepped up and got a great win,” BCS Head Coach Fred Yancey said. “Their kicking game failed them tonight and as result we were able to get a lot of very short fields. When we’re close we like to be pretty simple on offense, and that’s JR running the football. Our offensive line was really doing a great job blocking, so it made sense not to be risky, block well and JR did the rest.”

Tran-Reno’s five-touchdown night gives him 20 for the season.

Carson Donnelly intercepted a pass in the first quarter to help setup Briarwood’s first scoring drive, which Tran-Reno capped with a 1-yard run. After a blocked punt, Tran-Reno found the end zone again on a 13-yard touchdown run up the middle with a direct snap. He later made it 21-0 in the second quarter.

Lee responded with a drive to close the first half up 21-7 after a QB sneak from Noah Watkins with less than a minute to play before halftime.

A botched punt in the third quarter gave the Lions a short field, setting up another short TD run for Tran-Reno from 6 yards out. He added an 8-yard TD in the fourth quarter to cap the Lions’ longest drive of the game around 50 yards.

Lee was pushed back deep in their own territory most of the night, which helped set up the punting miscues. The Generals scored their second touchdown on a pass in the fourth quarter from Watkins to Darrius Taylor.

“Our defense did a great job of putting them in situations where they had to punt. That’s a lot of credit to our defensive line and linebackers,” Yancey said. “That was the story of the game – their inability to kick, because they played hard.”

Briarwood will be home for Thanksgiving to host Etowah County on Nov. 24 at Lions Pride Stadium. Kickoff is 7 p.m. It will be the first meeting between the two programs. Etowah defeated Brooks, 42-21, on Nov. 17 to advance to the quarterfinals.

A win in the quarterfinals would keep Briarwood at home in the semifinals on Nov. 30 with region opponents St. Clair County and Wenonah matching up next week in the other quarterfinal.