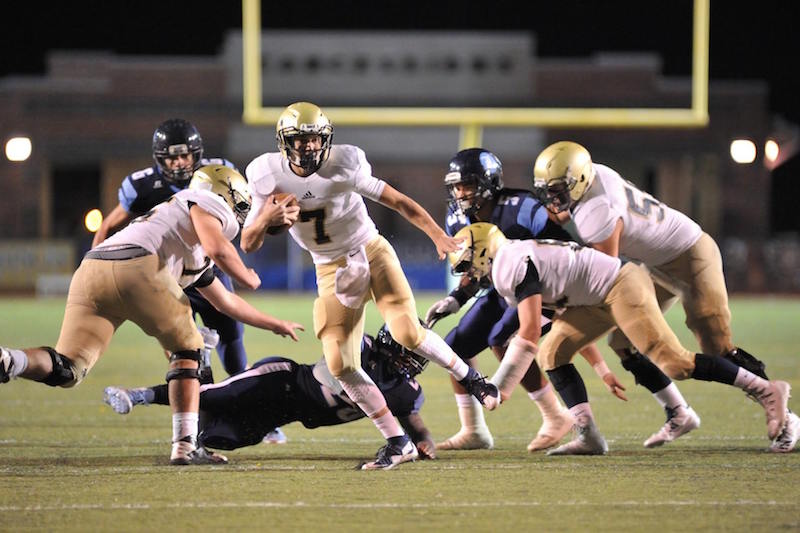 Briarwood will host Etowah in the quarterfinals of the playoffs this Friday night. So far the Lions have picked up a 62-0 and 35-14 win in the first two rounds, respectively. (For the Reporter/Larry Dancy)

The Briarwood Lions have preached about the playoffs since before the season even started. It was really a testament that started last offseason right after the team’s heartbreaking loss to Wenonah in the semifinals of the 5A playoffs.

Now the time they have been working for is here and through two games of the postseason, Briarwood is showing why they have been ranked No. 1 in the 5A classification for much of the year.

With that one goal of getting back to the semifinals to avenge last year’s loss and find a spot in the state championship, the Lions have made easy work of their first two opponents in the playoffs.

It started with a 62-0 win over Crossville in Round 1 on Nov. 9, where Briarwood put up 55 points in the first half and went on to shut out the visiting Lions to advance on to the second round.

It didn’t get much more difficult in Round 2, as Briarwood got five touchdowns from J.R. Tran-Reno in a 35-14 win over Lee-Huntsville on the road this past Friday, Nov. 17. If you’re keeping track, that Tran-Reno was responsible for all of the Lions’ scoring in their second-round matchup.

Now the vengeful group of Lions, who continue to prowl ever so fiercely, have their eyes set on the Etowah Blue Devils in the quarterfinals. It’s a matchup that will take place this Friday night, Nov. 24, at Lions Pride Stadium.

Briarwood brings a 12-0 overall record into the game, while Etowah sits at 11-1 after winning 10 consecutive games.

Now for the first time this postseason, Etowah will hit the road for a playoff game and take on the No. 1 team.

On the season, the Blue Devils have played four teams that have winning records and won by an average of 10.7 points per game.

Briarwood, on the other hand, has played five teams with winning records and won by an average of 22.4 points per game. The Lions have beaten four of those five teams by 20-plus points.

A big reason for Briarwood’s success this season has been the much talked about defense that’s giving up just 9.1 points per game through 12 games, which gives them one of the best defenses in the state. It’s a unit that has yet to give up more than 17 points and has only given up more than 14 points once.

They’ve pitched two shutouts and held six of their 12 opponents to seven points or less.

What that does is it allows the Briarwood offense to play more freely knowing they have a solid defense to help them out. Not just Tran-Reno’s unbelievable running talent, but they have quarterback Michael Hiers, receivers Hudson Hartsfield and Carson Eddy and even backup running back Luke Prewett.

Briarwood came into the season with one goal and now that they’re one week away from a semifinal redemption game, don’t expect them to fold now.