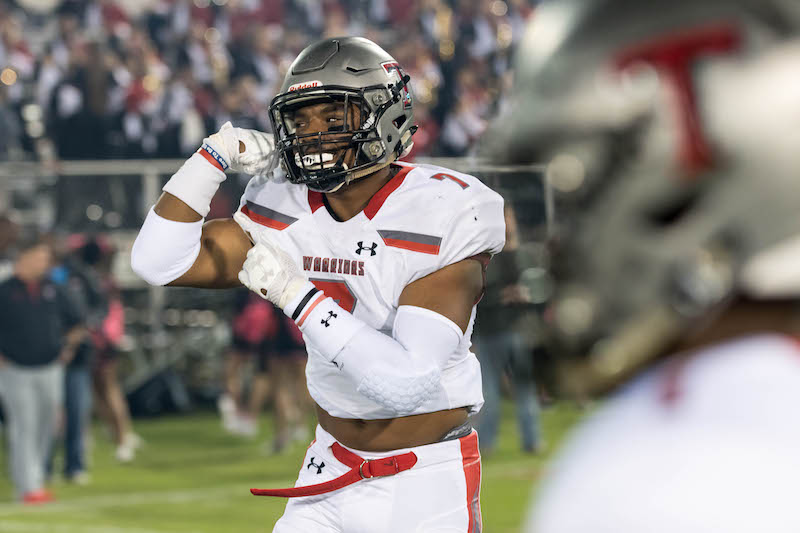 Thompson's K.J. Robertson flexes in the first-round matchup against Hoover, a game the Warriors won 32-25 for their first win over Hoover ever. He and the defense will have to play their best game to pick up another win in the semifinals. (Reporter photo/Neal Wagner)

Friday, Oct. 27, 2017, was a day that will forever be in the history books of the Thompson football program. In what was dubbed the “Game of the Year” at the high school level, the Thompson Warriors beat the Hoover Buccaneers for the first time in school history by a final score of 32-25.

Now, with an overall record of 1-20 against the Bucs all time, the Warriors (12-0) will host Hoover (9-3) for the newly dubbed Game of the Year: Part 2, this Friday night at Larry Simmons Stadium in the AHSAA Class 7A Semifinals.

If the first matchup wasn’t intense enough, now there is a trip to the championship game of the state playoffs on the line—a place Thompson hasn’t been since 1982.

Hoover on the other hand has been to the coveted title game a total of 15 times since the year 2000 and has compiled a record of 10-5 in those championship games.

As the defending state champions, Hoover will be looking to its third consecutive state championship game, but the Thompson Warriors will be battling for their first appearance in 35 years.

It’s a rematch game for the Bucs, who under head coach Josh Niblett are 9-1 in rematch games and 1-1 in revenge games.

That lone loss came to the Spain Park Jaguars in 2015 in a very similar situation. Having never beaten Hoover in school history, the Jaguars picked up their first in school history on Thursday, Oct. 1, 2015, in 17-0 fashion.

The two rivals then met again in the semifinals of the playoffs, where Spain Park escaped in a nail-biting 7-6 win. That same year, Hoover lost to Vestavia in the regular season before avenging that loss in the quarterfinals to set up the game with the Jags.

In an almost identical situation, Thompson will be looking to go from winless against Hoover to two straight wins in one season to cement a spot in the state championship game.

In the first two rounds of the playoffs, Hoover made a statement with a 49-7 win over Sparkman and a 56-21 win over No. 3 Hewitt-Trussville. After ending the season with two straight losses to the Warriors and IMG Academy, the Bucs seem to be clicking on all cylinders.

Thompson also continued playing well in those first two rounds with a 35-0 win over Huntsville in the first round and a 34-10 win over Mountain Brook in the second round.

Against Huntsville, the Warriors posted their first shutout of the season, which greatly pleased head coach Mark Freeman. The offense also could have easily scored 40-plus points but pumped the breaks with their big lead.

In the round-two win over Mountain Brook, Thompson looked sluggish in the early going, but responded with 28-unanswered points in the second half after trailing 10-6 at the halftime break.

Despite the early struggles, Thompson’s defense has held its two playoff opponents scoreless in six of the eight quarters it has played.

The first matchup between these two teams was a back-and-forth heavyweight bout.

Hoover jumped up by 10 in the early going, taking a 13-3 lead. They came out looking like the better and more physical team, while all of the shifting and blocking seemed to be confusing the Warriors’ defense.

Thompson rebounded with 14-unanswered to take the lead, thanks to two touchdowns just before the half. The Warriors came out and extended that lead on the first drive of the second half to take a 24-13 lead as it looked as if they now had all of the momentum.

But in the seesaw game, Hoover answered back with 12 unanswered points to take a slim 25-24 lead late. Thompson, however, went on a 98-yard drive to end the game and held on for the 32-25 win.

The take away was that neither team played their best game all the way through.

Thompson came out of the gates slowly to start, something they can’t do again, or surely Hoover will make them pay.

Thompson eventually figured out their schemes, which led to the Bucs loss.

I expect much of the same from each team in this game. Hoover will come out as the more physical team and try to make its presence known to see if the Warriors can match up.

What this game will come down to is Thompson’s start. Their offense didn’t play nearly as good as it could have for four full quarters in the first matchup. If they play the way they did at the end of the second quarter and beginning of the third and fourth quarters in game one for the entire game, then the Warriors will win.

While my head says to take Hoover because of the redemption factor and the sheer will and determination they’ll be playing with after the loss in the first meeting, I’m going the other way.

The convincing factor is that Thompson didn’t play its best game the first go around and won by a touchdown. While Hoover didn’t execute every play perfectly, I fell they played a more complete game in the first one and still lost.