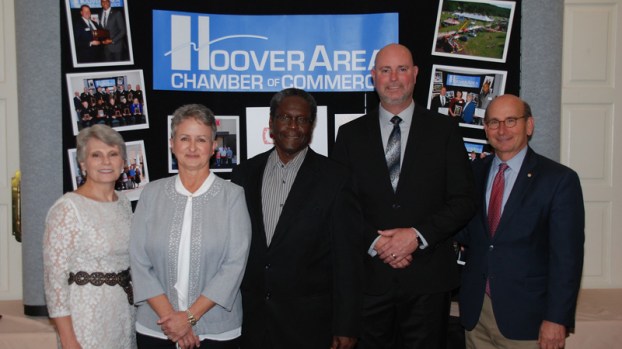 HOOVER – Lead nurse Vicki Holden was named Hoover City Schools Employee of the Year for 2017 at the Hoover Area Chamber of Commerce luncheon on Thursday, Nov. 16.

Holden, who is based at Hoover High School, supports nurses across the school system, HCS Superintendent Kathy Murphy said in announcing the award.

Murphy said that the system’s nurses administered medications more than 4,000 times during the most recent school year, and that they also serve students who require gastrostomy tube feedings and catheters.

“The work is rigorous, and she is so deserving of this award,” Murphy said. “The work these folks do is not just Band-Aids and Aspirin.”

Before the announcement, HCS Superintendent Kathy Murphy told those in attendance at Hoover Country Club about the school system.

The system recently eclipsed the 14,000-student mark for enrollment, Murphy said, and the day before the luncheon, 96.8 percent of the students attended school.

“I think that’s an ‘atta boy’ to the school district because students are wanting to be in school and participate in the process,” Murphy said.

In fact, only one day so far this school year did attendance drop below 95: the day of the solar eclipse, which many students chose to experience with their families.

Also, the school system had only 21 discipline referrals on Nov. 15 and averages 24 per day.

An important metric for the school system is ACT scores, Murphy said, which were available for 1,164 students who have test in 2017.

Hoover City Schools offers 27 AP classes, Murphy said, and there has been an increase in the number of students taking AP exams.

“Our students are willing to take it to the next level,” Murphy said.

The school system’s 2017 graduation rate for the four-year cohort was 92.7 percent, and many other students fulfilled their requirements over the summer.

“I believe we are in fine shape, but there are still challenges,” Murphy said.

NORTH SHELBY – Learning may not be top of mind for high school students on the Friday before the Thanksgiving... read more