On Monday, Nov. 20, that storied career saw a landmark win as the Helena Huskies defeated Spain Park 68-41 in the first round of the Sneaky Pete’s Rebel Classic at Vestavia to give Laatsch his 350th win as a head coach at the High School level.

It’s a game Laatsch has been a part of his entire life and a game he’s coached for 20-plus years, but he still has the desire burning in him to keep going.

“I tell the kids every day, ‘I’ve done this for a long time, but this is the only shot they get,’” Laatsch said choking up. “My passion for them to have the best basketball experience and the best opportunity to be the best individual and team they can be and in turn learn lessons that make them the best man they can be. That’s what keeps me going.”

Laatsch had no clue the first-round matchup with Spain Park in the Sneaky Pete’s Classic was the chance at his 350th victory, but his players certainly did and they came out and played for their head coach.

The Huskies started on an 11-0 run behind three 3-pointers in the early going. Helena’s defense also started strong and limited the Jagaurs’ opportunities early.

SPHS wasn’t able to score its first basket until the 4:14 mark of the quarter as the Huskies went on to outscore the Jags 18-5 in the opening frame. Five different players scored in the first quarter for Helena, while Spain Park saw just two players score.

The Jaguars came out in the second with a much different attitude, specifically on the defensive side. They forced four turnovers midway through the quarter to go on a 12-3 run to cut Helena’s lead to four at 21-17. 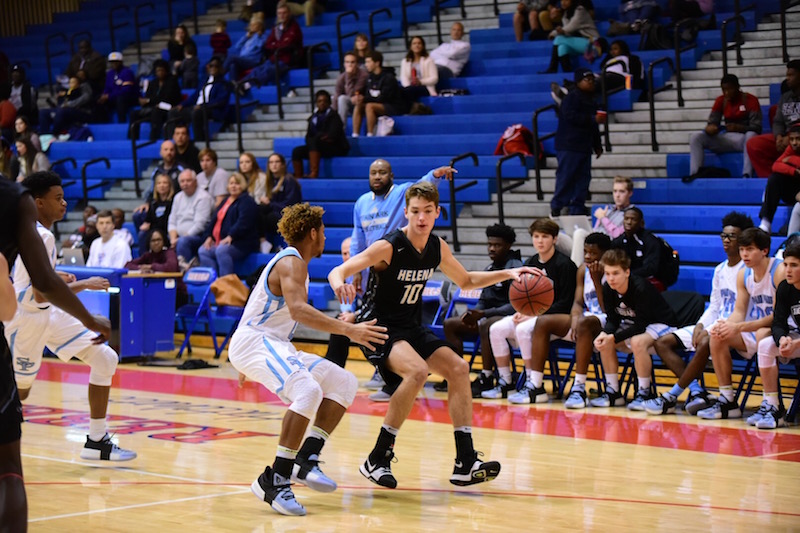 The run was sparked by turnovers as well as back-to-back 3-pointers from D’Arie Johnson and Matt Pichard.

“I thought we played so well to start and got that big lead and then maybe relaxed a little bit, while Spain Park made some adjustments,” Laatsch said. “We didn’t handle those adjustments very well.”

Spain Park eventually cut the lead to one at 25-24, but Helena bounced back right before the half with back-to-back 3-pointers from Austin Laatsch and Justin Stuckey to extend the lead back to 33-24 heading into the halftime break.

“We finished the half hitting the two big threes, which got the lead back to double digits,” Laatsch said. “I thought that was big heading into the half to give us a little breathing room in the second half and kill some of their momentum.”

Dionte Tolbert came out and started the third quarter with a 3-pointer and the Huskies were off and running from there. Helena went on a 15-0 run to end the quarter and take a comfortable 53-29 lead heading to the final period.

Helena came out and ended the game strong in the fourth quarter outscoring the Jags 15-12 to pick up the historic 68-41 win.

Helena, who moved to 3-0 on the season with the win, was led by Stuckey with 16 points. He hit three 3-pointers in the game. Ben Rose added 11 thanks to two 3-pointers and Devin Ervin added 10 to give the Huskies three double-digit scorers.

Spain Park was led by Matt Pichard and DayQuan Williams with 12 points apiece as the Jaguars fell to 1-4 on the season.

The Huskies will play in the semifinals on Tuesday, Nov. 21, against Lee-Montgomery.