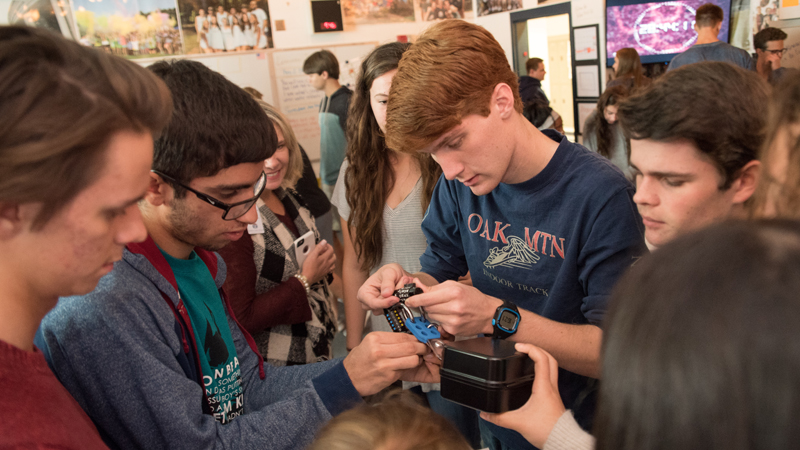 NORTH SHELBY – Learning may not be top of mind for high school students on the Friday before the Thanksgiving break, but Oak Mountain High School used the day this year to try an innovative, engaging approach to reviewing material.

About 140 students in AP macroeconomics and government classes participated in “Breakout EDU” on Friday, Nov. 17, in sessions that are similar to popular “Breakout” escape room games.

In Breakout EDU, groups of about 10 students used their knowledge of class material to solve clues that would allow them to open locks protecting the prize: a 5-percent bonus on their next test.

Teachers John Milton and Susan Schwartz transformed Milton’s classroom into the staging area, with clues—and red herrings—scattered all around.

Schwartz said the teachers wondered whether the groups were too large, but the number worked well.

“They’re all drawing on each other’s strengths to try to get this done,” she said.

Each group had a table with a box they were trying to unlock to reveal a flash drive that could be plugged into an accompanying laptop computer.

A countdown was displayed on monitors in the room, counting down from 45 minutes.

Upon opening the first lock, students found inside a smaller box with four locks, additional clues and a blacklight flashlight that was used to uncover other clues.

Milton said the exercise makes learning fun, offers an opportunity for students to work as a team and provides another way for them to learn the content.

“There has to be a balance between fun and learning,” he said.

One of the first groups that played the game tried to hack into the computer but was unsuccessful and thus wasted valuable time.

“Sometimes kids spend hours trying to find a shortcut when they would have been better off just going through the process laid out for them,” Milton said about the lesson learned.

OMHS Principal Kristi Sayers said she thought the students would benefit from such a challenging exercise.

“It’s definitely a challenge, but that’s good,” she said. “You want them to struggle a little bit.”

After the time was up, a debriefing was held during which the students could discuss their approaches to the game, lessons it taught and learn the answers to the clues.

More Breakout EDU sessions are planned for later in the school year at OMHS.