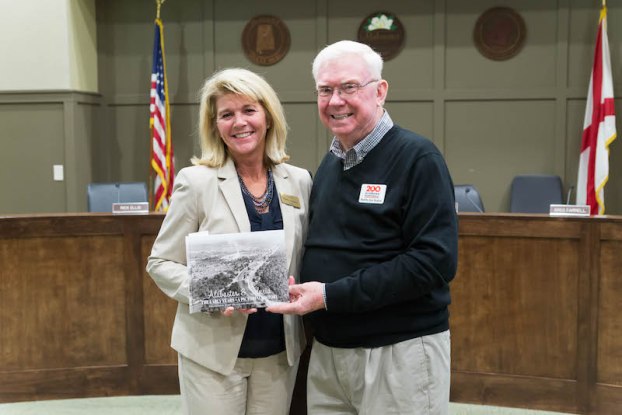 Bobby Joe Seales celebrates the release of “Alabaster and Siluria: The Early Years – A Pictorial History” with the Alabaster Mayor Marty Handlon at a council meeting on Monday, Nov. 13. (Reporter photo/Neal Wagner)

According to Seales, books that were pre-ordered were also recently shipped. So far, Seales said copies are selling at a rapid rate.

“I originally ordered 1,000 copies,” Seales said. “I’m looking at the amount that the publisher still has. There are only 25 left.”

Additionally, Seales said he has also ordered more copies of “Alabaster and Siluria” to sell at book signings and other local events. Copies will also be donated to school media centers and local libraries.

When gathering pictures for the book, Seales said he had reached out to locals over social media and was flooded with responses. Because older photos had to be scanned in a certain way, many people mailed or delivered their old photos, which were eventually returned to the owners.

“I collected over 1,000 pictures,” Seales said. “People bombarded me with them and a lot of them were very old.”

Because “Alabaster and Siluria” is only 128 pages, Seales said he had a difficult time choosing which of the 1,000 photos would be featured.

“I had to choose a little over 200 pictures,” Seales said.

According to Seales, “Alabaster and Siluria” is the first of three pictorial books that he plans to publish. A second one focused on Pelham’s history will be published in 2018, and the third book, which will cover Columbiana, is set for 2019. Seales said the publication of each book is centered around the bicentennials of both Shelby County and the state of Alabama.

Through the books, Seales said he wanted to educate locals on each area’s history and stress the importance of keeping physical mementos from the past.

Since its release, Seales said he has received an overwhelming amount of positive feedback and thanked all contributors, the city of Alabaster and Shelby County for their help.

“Since they’ve gone out, I’ve been flooded with people saying how much they have enjoyed it and the memories it has brought back,” Seales said.

“I had a lot of support from the city of Alabaster, the Alabaster Board of Education and legislators in Shelby County,” Seales continued. “It’s great to see people happy, and I feel like I have accomplished my mission.”

By GRAHAM BROOKS / Staff Writer HELENA–Girls within the Helena Belles organization had the opportunity to throw on some jerseys... read more