Many Shelby Countians come from away, and many of those imports live in the northern end of Shelby County.

Let a stranger ask those folks “Where ya’ll live?” Their answer often is “Birmingham” because of the tendency to identify as a suburbanite of the nearest city. 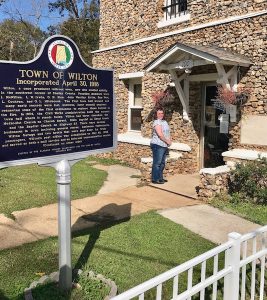 People in Wilton will be careful to tell you that they live in Wilton, although some of them live postally in Montevallo. That is because the United States Postal Service does not deliver mail from the Wilton Post Office.

If you want mail delivery, you must erect a mailbox and notify the Montevallo Post Office.  From then on, your Wilton street address is followed by “Montevallo 35115.”

Mail to “Wilton 35187” goes to the USPS office that sits on the town’s western edge. When our family lived in Wilton, we eschewed home delivery, rented a post office box and picked up our mail.

Great conversations occur in the lobby in front of those boxes. Go early in the day, and you will meet neighbors and catch up on the latest news, such as the newest in a string of grandbabies or the blow-by-blow of an old man’s killing a copperhead with a hoe. The late copperhead was proudly displayed out front on a pickup’s hood.

Now and then I miss Wilton and need to re-connect. Thus, I went to a Town Council meeting recently. The Town Council meets in the front room of a little house on Church Street that is the Wilton Community Center.

Every municipal government in the nation must deal with citizens angry about certain staples of municipal life: Speeding cars, dogs running at large and illegal livestock.

On this particular night Wilton drew two out of three.

A young couple with a sleepy 11-month-old in tow reiterated what has become a familiar complaint to Smitherman and the council. A neighbor’s pit bull frequently runs loose, and they fear it will attack their child.

Councilman Henry Miller knew the dog. He had been chased by it when walking along Alabama 25. Solution? A wild animal live trap and county animal control.

The council discussed whether it had the money to buy work lights for the utility department.

Martin favored the purchase. “I have sat in my car with the headlights shining on them so they could fix a leak at night.”

“I see we are still dealing with the chickens,” said Martin a bit later.

“And a rooster and two ducks,” added a council member.

“I ain’t got that rooster no more,” the accused spoke up. “When I heard one of them crowing, I had a time figuring out which one. I had to sit in the hen house for hours ’til I figured out which one was the rooster.”

You could almost hear John Mellencamp singing in the background: “Well I was born in a small town

By NANCY WILSTACH / Community Columnist A radio station in Montevallo has avid listeners around the globe who tune in on... read more