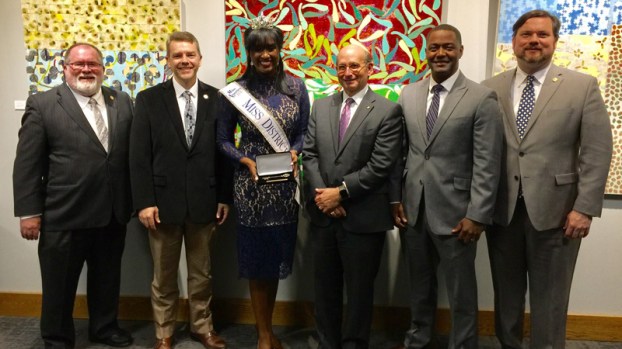 HOOVER – Hoover native and Miss District of Columbia Briana Kinsey was recognized with a proclamation at the Hoover City Council on Monday, Nov. 20.

Kinsey won third runner-up in the Miss America Pageant in September, winning a $15,000 scholarship and a $5,000 science, technology, engineering and math scholarship.

Kinsey also won the Miss America Community Service Award for her work with the Daring to Defeat Diabetes non-profit organization she founded, according to the proclamation presented by Hoover Mayor Frank V. Brocato.

Kinsey is a 2011 graduate of Hoover High School and 2015 graduate of the University of Alabama, where she majored in biology and pre-med studies.

A reception was held afterward for family and friends.

Also at the meeting, the Hoover Softball Association presented a donation of $5,200 to Down Syndrome Alabama in honor of a local player who Association President John Park called an “awesome ballplayer and a big-time inspiration.”

Parker said the organization collects funds for the charity through travel ball tournaments hosted in Hoover and a fall ball day dedicated to the cause.