Near Sterrett, Alabama, sits a refuge from everyday life. Next to a pristine lake and among tall pine and hardwood trees, natural flower and fauna, and abundant wildlife sit two early Shelby County log cabins. Dating from the 1840s-1850s, they are testaments to the hardy people who first migrated to settle land opened around 1817. The smaller house began as a one-room cabin and is original to the property. The other, a larger structure, is formed from two cabins moved from nearby Westover and Chelsea. It is called the Spearman-Crane house – named for the original families who built them. All have been carefully returned to their original appearance and are decorated with family antiques, quilts, artifacts and local pottery. It’s like walking back in time. And, the owners are a most delightful couple, Charles and Jane Ellis of Greystone. 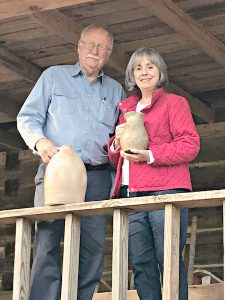 Charles and Jane Ellis stand on the porch of their restored log cabin near Sterrett with examples of early Jugtown pottery. (Contributed)

The “farm” has been in the family since 1960, when Jane’s father, J.D. Hester, saw a Birmingham newspaper ad for acreage and an old house. He bought the place upon his first visit – without even telling Jane’s mother. The Hesters and, later, the Ellises began the decades-long journey in restoring the original house and adding additional structures as the family grew. Charles, now retired after 44 years on faculty at Indian Springs School, continues the labor of love begun by his father-in-law. He is a self-taught expert on early log structures and has done most of the restoration work himself. Formally trained as an English and philosophy teacher, he admits to learning “a lot about history along the way.” After completing the structural restoration on each cabin, Charles turned them over to Jane. Her life-long love of antiques is evident in the carefully crafted interiors of both cabins. To design rooms both comfortable and welcoming, she incorporated family pieces and items native to the area for over a century. And, that brings us back to Jugtown – and how I was given the opportunity to visit the farm and meet this talented duo.

Charles read my earlier column about Sterrett pottery. He contacted me, told me about their examples, and offered to show them off. So, on a glorious November afternoon, we sat and talked in front of a cheery fire. The room was one that my great-great grandparents would easily recognize. I must admit that seeing their exquisite examples of fired Alabama clay made my heart skip a beat. But, meeting Charles and Jane was better by far. A guided tour of the grounds confirmed their knowledge of and love for this place and the things of yesteryear. Without them, a part of Shelby County’s heritage would be no more. I hope to talk more about them and their farm in 2018 Bicentennial highlights. If you know more about the history of the Crane family of Chelsea and the Spearman family of Westover, contact me dayrened@bellsouth.net. Charles and Jane are always interested in learning more about their cabins.