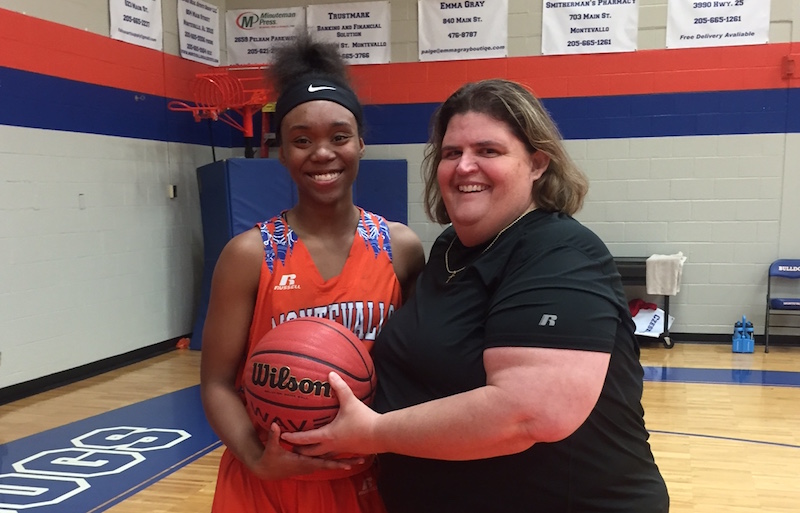 Lauryn Lilly poses with head coach Tena Niven after scoring her 2,000th career point during a 68-29 win over Isabella. (Contributed)

MONTEVALLO – The Montevallo Bulldogs girls’ basketball team did more than just open its season on Monday, Nov. 20, with a dominating 68-29 win over Isabella on the first day of their Thanksgiving tournament.

It also marked a historic day for Montevallo player Lauryn Lilly, who surpassed the 2,000-point mark in her varsity playing career with the Bulldogs.

“Lauryn was very tight and anxious about reaching the goal,” head coach Tena Niven said after the win. “We were both relieved once it was behind her.”

Lilly came into the game needing 16 points to reach the milestone and she notched two additional points to finish the game with 18 and grab 2,002 points. The exciting basket came on a 3-pointer at the beginning of the final period of play.

While the Bulldogs (1-0) came out playing very well in the first half, posting 35 points to Isabella’s slim 17, Niven thought they could have started the game with a bit more energy.

“We started out very flat tonight,” Niven said. “After the half we were able to increase our intensity.”

The Bulldogs came out in the second half and posted 33 more points combined between the third and fourth quarter to win by the final score of 68-29. While the point total wasn’t quite as big as the first half, Niven still felt as if the team played better, mainly due to the defense holding Isabella to just 12 points.

Montevallo was able to double up Isabella in the scoring category in both halves of play, outscoring them by 18 in the first half and by 21 in the second half.

The story of the night was undoubtedly the special moment for Lilly, as she reached a monumental milestone in her playing career. Lilly finished second on the team in scoring as Tekay Hill led the way with a game-high 28 points.

Isabella was led by Kiara Ford with 15, while Synia Chattman and Alexis Owens added seven apiece.