“First, I find songs I feel a connection to,” said Robbie Clark, vocal artist for Chelsea’s newest theme song “Chelsea Train Tracks.” Then, because I know my songs have the potential to reach listeners deep in their souls, I sing it in a way the listeners feel it’s written for them.”

Clark’s debut single just released on cdBaby.com, which calls it “a modern country tribute song to small rural communities whose growth is based historically on the railroad tracks coming through town and the present longing to go back.” 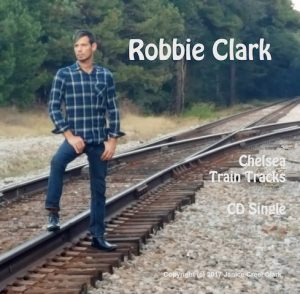 “I was so glad Robbie could sing on this project,” said mom and song writer Janice Clark. “He has a great voice and his musical interpretation gives it more of a contemporary feel while remembering our history.” (Contributed)

Janice Creel Clark, the song’s writer and Robbie’s mother, grew up visiting her relatives, Clyde and Annie B Adams, in Chelsea. As an adult, her involvement with and support for the new Chelsea Historical Society led her to write “Chelsea Train Tracks.”

“I knew we needed an identity song – something that spoke to residents of both the old town and the new city,” she said. “For me, there were several ‘ah-ha’ moments that crystallized the train tracks’ theme.

“The first was when we were interviewing G.W. Weldon for an oral history project,” she continued. “We were midway through when we were interrupted by a train roaring past. Everybody laughed and waited patiently because the trains have been accepted as a part of living in Chelsea since 1908.

“That night I drafted out lyrics about how all our life journeys weave metaphorically with the railroad tracks – all of us, those who’ve lived here forever, those who move back home, and those who discover and choose to move here.”

“As a first-time songwriter, Mrs. Clark encapsulated her best memories of this once small community that is now the fastest-growing city in the fastest-growing county (Shelby) in Alabama,” said Charles Harnach, who was the music composer, keyboardist and producer on the project.

Harnach is the winner of Clio, Addy and Telly awards as well as being a Grammy-nominated arranger, keyboardist and producer.

“This song has great insights into the area called Chelsea,” he said. “Mrs. Clark has communicated through her lyrics to the listener the love she feels for her town. She wanted an identity song for Chelsea that could be used at festivals and civic events. That has been our goal in producing it.

“What a pleasure it was to work with Robbie recording the vocals for the song,” Harnach continued. “Although a relative newcomer, Robbie was right at home in the studio and delivered the perfect vocal, even adding harmonies. His casual style makes the listener feel right at home … in Chelsea.”

“Driving home to Chelsea through the Narrows’ scenic drive always puts me in such a peaceful state-of-mind, especially in the fall,” Robbie said.

Robbie will be back home again soon, invited by Mayor Tony Picklesimer to sing the song at Chelsea’s Christmas Open House, Dec. 16.