Attending Dye’s informational meetings for the 17-18 PHS Mountain Biking teams revealed the team’s commitment to adding more young women. “I’ve been able to recruit some volunteers to coach the girls,” Dye told me before the meeting. “Sabrina Ross was our only young woman last year.” 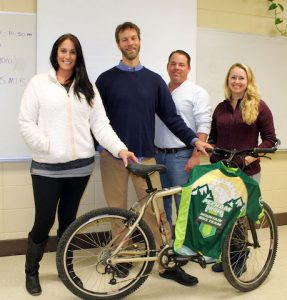 “This team has been great for Sabrina,” her mom said at the meeting. “She’d be here, but she had to work. She wanted me to tell everyone know how much she loves mountain biking. If she’s not able to get out and bike for a while, she hates that.”

PHS’s Mountain Bike team began when Pelham City Schools formed in 2014. They’ve become very established at PHS. Several media groups around school were quite envious of their ad campaign last year featuring a journey through the woods—via bike, of course.

The group practices at Oak Mountain State Park and the YMCA allows them to use their spin room on rainy days. Five girls attended, many young men and many parents. Even alumni parents were in attendance.

“We become a PHS biking family,” Dye said. “Setting up courses on Saturday and riding on Sundays helps us get to know everyone.”

“Building up your fitness is important,” volunteer coach Deb Munago said. “I teach a spin class at the Hoover Y and all gyms have spin classes.”

Beyond encouraging physical fitness, Dye insists on strong academics among his team members. Since mountain biking is a club sport, academic standards are set by the coaches.

“If anyone has a grade that drops below 65, we’ll be meeting here for study hall in the mornings,” Dye said, “Until we get those grades up.”

A PHS alum, Dye gives back to his school generously as a volunteer coach. Contact rdye@pelhamcityschools if you’d like to ride this spring.