Chelsea finishes 2-1 in own tourney 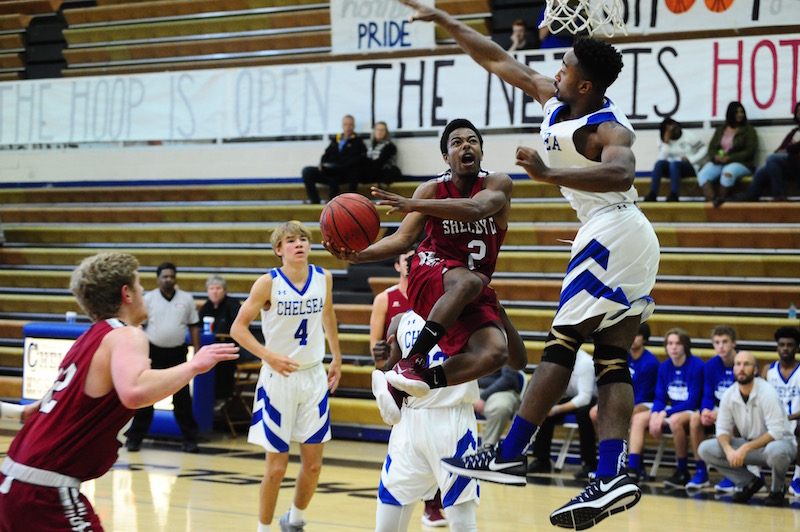 CHELSEA – Chelsea concluded the North-Shelby Tip-Off Classic on Wednesday, Nov. 22, with a 65-33 win over county foe Shelby County to finish the tournament with a 2-1 record.

The Hornets, now 3-2 on the season, got a win over the Wildcats, as well as a victory over Childersburg, while dropping a game against Talladega. Below is a recap from each of their three games in the tournament.

In the final round, sitting at 2-2, the Hornets were looking to improve back above .500 on the season and did just that with an easy 65-33 win over Shelby County.

The game started very competitive as Nathan Bates came out on fire for Shelby County. Bates hit two 3-pointers and a layup in the first couple of minutes to give the Wildcats an 8-4 lead.

On the opposite end of the floor, Daniel Washington came up and put up the Hornets first four points. It led to a 10-6 advantage for Shelby County in the early going, before Chelsea ended the quarter on a 9-0 run to take a 15-10 lead.

The second quarter saw the Wildcats get within five after Bates hit another 3-pointer, but eventually the Hornets ended the quarter on a 12-0 run to take all of the momentum into the half with a 36-19 lead.

Chelsea didn’t look back the rest of the way putting up 12 more points in the third quarter and 17 in the final period to win by the final of 65-33.

The Hornets were led by Matthew Lanzi with 14 points in the game, while Tyler Coleman added 11 for two double-digit scorers. In all, 10 of Chelsea’s 12 players scored in the game with seven of those 10 having at least five points.

Chelsea opened the tournament with a 57-45 win over Childersburg on Monday, Nov. 20.

After falling behind 4-0 in the early going, Chelsea went on a 10-2 run thanks to five points from Lanzi, a layup by Washingotn and a 3-pointer from Coleman.

Chelsea didn’t give up the lead the remainder of the game as they opened up the second quarter on an 11-2 run to take a 23-11 advantage. The Hornets had seven different players score as they took a 29-19 lead into the half.

The Hornets came out with a strong defensive mindset in the third quarter and forced several turnovers to take a 19-point, 45-26, lead over Childersburg.

Chelsea eventually extended that lead to 25 points at one point in the fourth quarter, before the visitors went on a run late in the game to make the contest seem closer than it actually was with the final score of 57-45.

Washington led Chelsea in the game with 11 points, while Coleman added 10. The Hornets saw 10 of their 12 players score to open the tournament.

Chelsea didn’t respond to the win with its best efforts as Talladega came out and handled the Hornets by 22 points in a 56-34 win.

Talladega raced out to a 12-1 lead in the first quarter and never let go of that advantage for the remainder of the game.

Chelsea did answer with an 8-1 run to trim the lead to 13-9 after Sam Towery hit a 3-pointer at the buzzer, but that’s as close as the Hornets were able to get.

Talladega took a 24-19 lead into the half as Chelsea remained within striking distance, but the Tigers responded with a dominant third quarter that saw Chelsea score just four points in the period.

In all, the Hornets added just 15 second-half points to Talladega’s 32 as the Tigers went on to win by the final of 56-34.