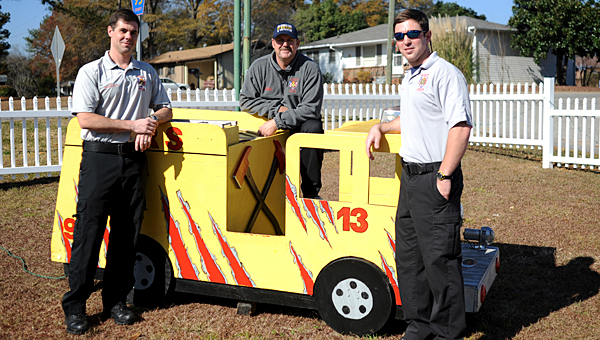 Alabaster firefighters will again bring the Christmas village to Station No. 1 off First Avenue West beginning on Dec. 2. (File)

“It’s neat to know that some of the firefighters who are there now came through it when they were young, and now they’re helping to bring it to other kids,” Golden added.

Immediately following the Alabaster’s Christmas parade on Dec. 2, the fire station off First Avenue West next to the Albert L. Scott Public Library will open the Christmas village to local kids and their families.

The village features several props, such as a helicopter, replicas of the city’s yellow and red fire trucks, a gingerbread house and a Chevrolet Tahoe command vehicle modeled after the department’s actual command vehicle.

“All the props were built and are maintained by the firefighters,” Golden said. “It’s something the department really takes pride in.”

Continuing a tradition the department began last year, AFD is encouraging visitors to the Christmas village to send their photos to Santapics@alabasterfire.org to be posted on the department’s Facebook page.

Golden said the department received many photos last year, but is looking forward to receiving more this Christmas season.

“It stays busy, especially as we get closer to Christmas,” Golden said. “It’s good for the kids and the community to be able to enjoy something that’s safe and family friendly. And it’s a good way for us to be able to interact with the community.”