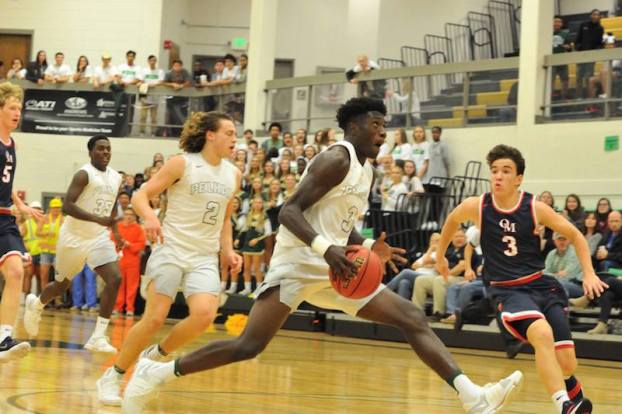 Pelham goes 2-1 in Battle at the Beach

GULF SHORES – The Pelham Panthers improved to 3-2 after winning two games and losing one at the 2017 Battle at the Beach Thanksgiving tournament held at Gulf Shores High School.

The Panthers closed out the tournament with a 59-44 win over Spanish Fort on the final day after beating Gulf Shores 60-47 in the opener of the tournament and falling to Alma Bryant in the second round.

At the conclusion of the tournament, Justin Allison had posted 61 combined points throughout the three games, but Chris Brown was the pleasant surprise.

Coming into the season as their second best returnee behind Allison, the Panthers were hoping Brown could step up as a legitimate second scorer. He did just that throughout the tournament, posting a combined 59 points in the three games.

Pelham was able to improve to 3-2 on the season with losses to Hueytown and Alma Bryant and wins over Oak Mountain, Gulf Shores and Spanish Fort on its resume.

In the final round of action, Pelham saw Allison and Brown both step up to give the Panthers a solid 15-point, 59-44, win over Spanish Fort on Wednesday, Nov. 22.

While the Panthers were coming off a tough loss to Alma Bryant thanks to a slow start, Pelham responded by flying out of the gates in the final game of the tournament.

The Toros went on several runs the rest of the game, but never got any closer than a 10-point deficit.

Pelham couldn’t have gotten off to a poorer start as the Panthers fell behind 21-0 to start the game. They did, however, go on to battle back and chipped away at that lead the rest of the game, before losing a tough three-point game, 66-63, to Alma Bryant.

For the second game in a row, Brown led the Panthers in scoring with a season-high 26 points; while Allison added an additional 23 points in the comeback effort.

In the first round of the tournament, Pelham got 35 combined points from Allison and Brown. This time Brown was the leading scorer with 20 points and seven rebounds; while Allison added 15 points, seven rebounds, five assists and two steals.

Their efforts led to a solid start to the tournament behind a 60-47 win over host school Gulf Shores.

Pelham started the game on fire with a 12-2 run behind five different scorers before Spanish Fort went on a 5-0 run to end the quarter.

The game got much closer in the second quarter as Spanish Fort got within four at the half. Pelham held a slim 29-25 lead at the break.

After the two teams battled back and forth to start the third, Pelham laid down the hammer and went on a 17-4 run to take a commanding 20-point lead at 55-35. The run was yet again sparked by five different players scoring a point.

The Panthers didn’t look back after gaining that large lead and went on to finish things off down the stretch for a 60-47 win to kick off the tournament.