Magical ride comes to an end for Thompson 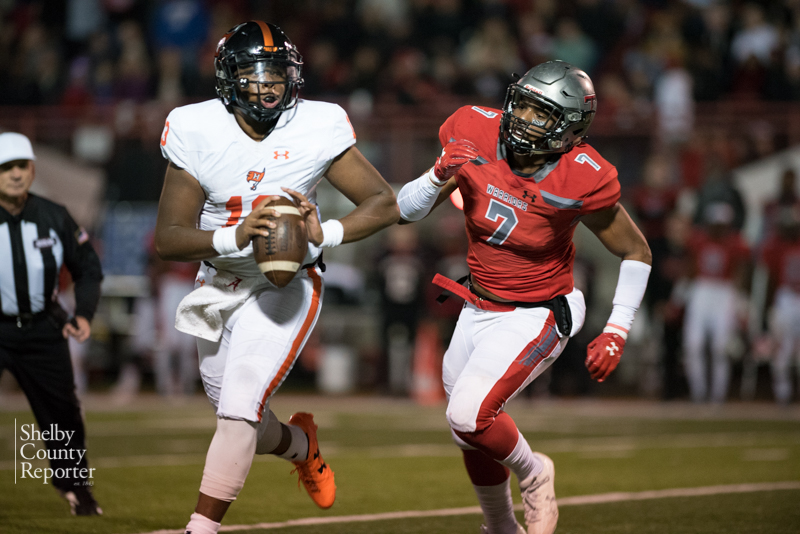 Thompson's KJ Robertson runs after the Hoover quarterback in his final game for the Warriors. (Reporter photo/Keith McCoy)

Jojo Ford, with a crutch under each arm after tearing an ACL last week, led his Thompson Warriors onto the field at Larry Simmons Stadium for one final time, with his senior teammates behind him at the 50-yard line as captains on Friday, Nov. 24.

It set what was an emotional scene before the rematch of the year between the Warriors and Hoover Buccaneers—a matchup Thompson won back on Oct. 27 for the first time in school history.

Thompson won that first matchup 32-25 to steal away the region crown from Hoover, and while the Warriors emotions were high, ready to protect Larry Simmons for the final time; Hoover had one thing on its mind—redemption.

It ended up leading to a fast start and a just as fast ending by the Bucs as they went on to break the hearts of the Thompson players and fans by picking up a 31-12 win to advance to the state championship game.

“We didn’t make the plays tonight we have made on other nights,” Thompson head coach Mark Freeman said after the loss. “For whatever reason that is. We were a couple of plays or a player away from probably sitting here as winners, but you can’t take that away from our kids, they fought their guts out.”

Thompson had plenty of opportunity to make some plays in the first half, but instead found themselves in a 17-0 hole at the half.

Two plays were the difference for Thompson in the half, a dropped pass by Michael Pettway wide open in the middle of the field and a dropped pass on a swing route by Shad Byrd a couple of possessions later.

Both would’ve probably ended in touchdowns, but instead led to punts.

Just as they did against Mountain Brook, Thompson came out much more efficient in the second half, specifically on the defensive side of the ball.

The Warriors forced Hoover into three-and-outs on three of four possessions to start the second half.

This woke the offense up, who scored its first touchdown on a 13-yard run by quarterback Taulia Tagovailoa to cut the lead to 17-6.

Hoover answered back with a touchdown to extend its lead back to 24-6, but Thompson scored in a hurry again to make it 24-12 off of an Ahmad Edwards touchdown catch with just less than 10:00 to play in the game.

The Bucs, however, started playing field position and pinned Thompson inside the 5-yard line twice, once being on the inch line; which made life difficult for a Warriors offense needing to put up points in a hurry.

Thompson was unable to go on another scoring drive as Edwards’ catch was the last ever in Larry Simmons Stadium. Hoover added one more touchdown with 2:02 left to play to create the final of 31-12.

Defensively, Jalen Rayam went out with a bang posting 14 tackles, 5.5 of which were for a loss. Myles Brown also had a solid game and came away with an interception.

While the game itself didn’t end the way Thompson wanted it to, Freeman couldn’t help but praise his team for their historic season.

“It’s not what we wanted,” Freeman said. “But I’m proud of our kids and I’m proud of where our community and program has come. Who thought three years ago this place would be packed out and we would be at 12-0 in the semifinals hosting Hoover?”

Freeman then proceeded to pull out a Purple Heart he had been given before the game and said, “Let me tell you how much this means to this community. People don’t know how much it means, but I had a veteran come in and give me this before the game. You don’t think it means something to the community, what these kids have done? That’s what it’s about. God be the glory.”

It truly was a special season for a group of seniors that were 0-10 their freshman year.

As Freeman said on multiple occasions to his team in the huddle, “this one game doesn’t define what you’ve done at Thompson. You hold your head high and be proud of what you’ve accomplished this year.”

“I know that we’ve got better days coming here now because of what this group of kids was able to accomplish this year,” Freeman said.

The Warriors magical season came to an end with an overall record of 12-1. Their best finish since 1982 and something that will spark this program moving forward.