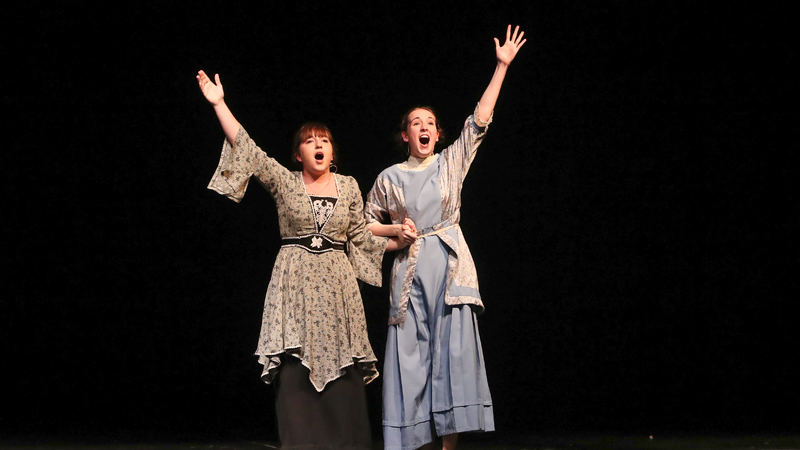 HOOVER – Spain Park High School’s theatre department is hoping to continue an impressive streak with a play based on the suffrage movement.

The department has won Best in Show six of the last seven years for its one-act play at the Trumbauer state festival, which this year will be held in December at the University of North Alabama.

The play, “Deeds Not Words,” won Best in Show, Best Actress, Best Actor, Best Supporting Actress, Best Ensemble and other awards at the Trumbauer District Festival, which is the first step in a competition for secondary theatre programs, on Nov. 4 at Helena High School.

“Deeds Not Words” was also presented, along with select individual events, at Spain Park’s annual Trumbauer Showcase, which was held Nov. 14-16 at the school.

The effort began with Theatre Director Eric St. John receiving a Fund for Teachers grant and traveling to Manchester, United Kingdom, and Seneca Falls, New York, to study the origins of the women’s suffrage movement.

After bringing his knowledge back to the classroom, students wrote an original play based on the life of Lady Constance Lytton, an English aristocrat who disguised herself as a working-class woman in order to join the suffragette movement.

“Students did quite a bit of research on the subject during the creation process,” St. John said. “This included each performer starting a character journal, in which they included photos, newspaper articles, letters, etc., of their characters. We even had a Skype session with an Oxford professor who wrote a book on Lytton.”

Lytton was imprisoned four times for her efforts, including once where she was force fed while taking part in a hunger strike.

She wrote pamphlets on women’s rights, newspaper articles and a book on her experiences, “Prisons and Prisoners.”

“I wanted to find someone who was like me,” Blocker said about her character. “She was very determined to fight for women’s right to vote. I feel like I have that drive for things I’m passionate about.”

The casting crew included 24 students from all grade levels, while others helped with sets and other aspects of the production.

Students said the play evolved during the creative process, as they changed how it went about telling the story.

“The script we started with, it was a completely different person,” Sapir Blain said.

A challenging aspect of the production was developing characters and plot within the 45 minutes allotted.

“Bringing it together was difficult at first,” said Rachel Ponder, who played Lytton.

St. John said the experience allowed students to learn about an important historical movement while working together toward a goal.

“It’s a good opportunity to use theatre to teach outside theatre,” St. John said. “I’m really proud of what they’ve done. They’ve done a good job with a heavy topic.”