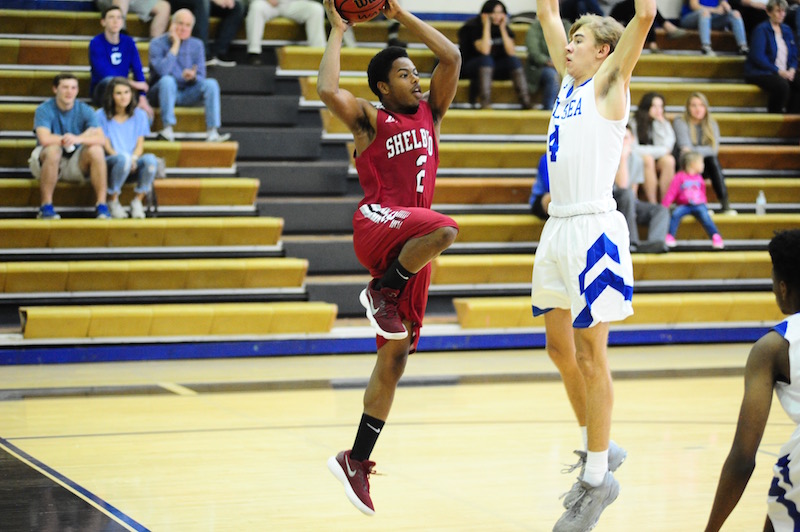 Several teams competed over the Thanksgiving break and got off to strong starts for the 2017-18 basketball season. (Reporter photo/Alec Etheredge)

It was an action packed week of high school basketball as teams from all over the county participated in Thanksgiving basketball tournaments. Here is a boys and girls recap from several of the teams that competed.

The Spain Park boys basketball team took part in the Sneaky Pete’s Rebel Classic held at Vestavia High School over Thanksgiving and finished the tournament with a 1-2 record.

The Jags redeemed a loos from the week before by taking down Homewood 42-38, but fell to Helena 68-41 and to Clay-Chalkville 53-44. At the conclusion of the tournament, the Jaguars hold a 2-5 overall record through seven games.

Thompson continued its slow start to the 2017 season at the Legends Tournament held at Parker High School. The Warriors are still missing several key contributors due to football players not participating and it showed.

The Warriors ended the tournament winless with a 59-48 loss to Woodlawn, a 61-31 loss to Minor and a 78-44 loss to Shades Valley. They currently have an overall record of 0-6.

Shelby County traveled to Chelsea for the North-Shelby Tip-Off Classic during the holiday break and was unable to pick up a win. The Wildcats saw some strong individual performances, but lost three consecutive games.

The Montevallo Bulldogs opened their 2017 season at the Mortimer Jordan Jeff Dennis Jewelers Invitational and picked up one win and two losses.

The Bulldogs, who are currently playing several young players due to football injuries, finished the tournament 1-2. That lone win for Montevallo came over Westminster at Oak Mountain thanks to a tightly contested 50-45 victory. The Bulldogs went on to lose to Mortimer Jordan 64-32 and Gardendale 63-37 to close out the tournament.

It’s been a rocky start for a talented Thompson Warriors girls basketball team. The Warriors won their opener over Pinson Valley 54-42 before dropping their next three games in a row.

The first of those losses was to Helena before traveling to take part in the Huntsville High School Thanksgiving tournament. In Huntsville, Thompson lost 53-40 to Columbia and 61-24 to Muscle Shoals, before picking up its second win of the season 53-25 over New Hope.

The Warriors then went on to play Carver on Saturday, Nov. 25, and dropped their fourth game of the season thanks to tightly contested 48-43 loss. Brooklyn Oden had a combined 50 points in that four game stretch over Thanksgiving.

Chelsea is off to a very surprising 0-6 start after dropping two more games over the Thanksgiving break. Expected to be one of the better girls teams in the county this season, the Hornets have just failed to get things clicking in the early going.

After a win over Thompson early in the season, the Helena Huskies girls basketball team has struggled. The Huskies now sit at 1-5 after losing four consecutive games, three of which were in the Bryant Bank Tournament at Hewitt-Trussville over Thanksgiving.

The Lions started their season at the Bryant Bank Tournament by winning one of three games. That one win was over the Huskies 42-27 and sandwiched between a 70-40 loss to Hewitt-Trussville and a 69-24 loss to Homewood.

Calera couldn’t have asked for a better start to the 2017-18 season as the Eagles picked up two convincing wins. The first was a 57-26 win over Dallas County and the other a 50-30 win over Isabella as they got off to a nice 2-0 start.