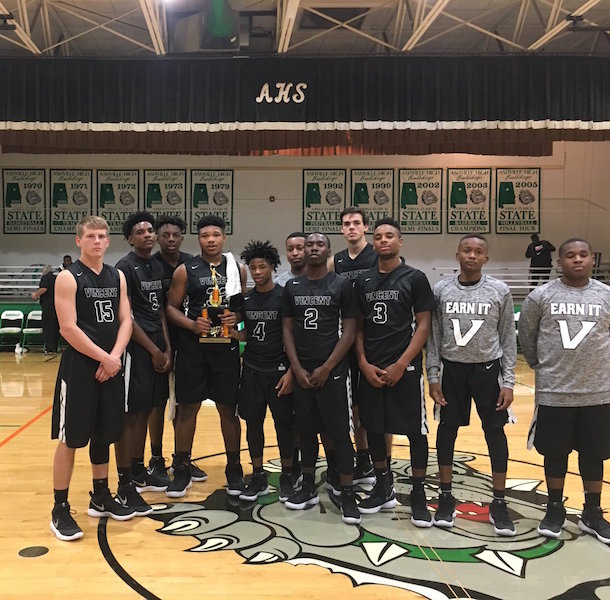 The Vincent basketball team stands with its trophy after winning the 2017 Ashville Thanksgiving Tournament. (Contributed)

ASHVILLE – It’s been yet another impressive start for head coach John Hadder and the Vincent Yellow Jackets’ 2017-18 basketball team as they strung together two straight wins to take home the 2017 Ashville Thanksgiving Tournament.

The Yellow Jackets (3-1) started the tournament with a dominant showing against Ragland posting 73 points and limiting Ragland to just 38.

Vincent got off to a 13-8 start in the opening quarter, which marked the slowest offensive quarter in the game as they took some time to heat up.

It didn’t take much time, however, as the Yellow Jackets answered the slow offensive start with their best quarter of the game in the second period. They put up 25 points and outscored Ragland 25-14 in the quarter to take a strong 38-22 lead into the half.

Out of the halftime break, Ragland posted its best quarter of the game, but the third quarter still saw Vincent edge their opponent by three points with a 17-14 advantage.

It led to the Yellow Jackets taking a 55-36 lead into the final quarter of play. In that final period, Vincent posted the most lopsided quarter in the game as the defense limited Ragland to just two points, while the offense posted 16 more points for the 71-38 win.

The entire team pitched in for an unbelievable performance to open the tournament as four players finished in double figures. Malik Hamilton led the way shooting 9-17 from the field and scoring 22 points, while adding eight rebounds and three assists.

Chris Hardie finished 8-15 from the field and posted 19 points to finish second on the team. He also added 10 rebounds for a double-double and picked up three steals and two blocks as well. Kaleb Wilson and Jackson McGinnis both added 10 points apiece. McGinnis also added five steals to lead the team.

On the final day of play, the Jackets weren’t able to go as deep into their bench thanks to a closely contested game, but they were still able to pick up a hard-fought 55-45 win over Jacksonville thanks to a strong final quarter.

The two teams headed into the fourth knotted at 36-36, but Vincent outscored Jacksonville 19-9 in the final frame to pick up the 10-point win.

Both defenses stepped up in the third quarter as each team was only able to score eight points. Vincent’s offense, however, woke up in the final quarter, while Jacksonville continued to struggle from the field.

A big reason for the Yellow Jackets’ success was Hardie’s consistency. He finished the game shooting 80 percent from the field making 8-of-10 field goals. He also shot 8-9 at the free throw line and ended with a team-high 24 points, while also adding 15 rebounds for his second double-double in as many days.

Zavien Kelley added 14 points and two assists in the win.

By Chris Megginson | For the Reporter PELL CITY – After a 1-19 combined record the last two seasons, Vincent’s... read more