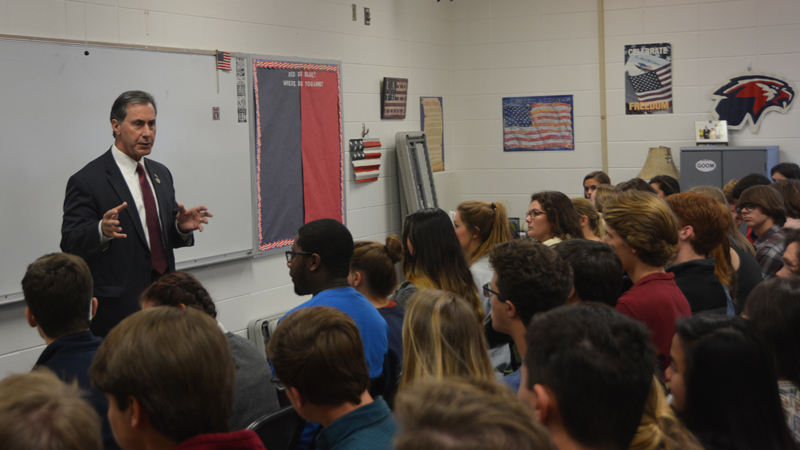 NORTH SHELBY – U.S. Congressman Gary Palmer visited Oak Mountain High School and encouraged students there to be leaders in whichever path they choose for their life.

“You’re all going to lead,” said Palmer, who represents Alabama’s Sixth Congressional District in the U.S. House of Representatives. “One day you may be standing up here talking to a group of students, preparing them to take your place.”

Palmer said he grew up in a small town, his father had an eighth-grade education and Palmer was the first person on either side of his family to attend college.

He told the students he understands there are many things competing for their attention but stressed the importance of making good decisions.

“Things are changing at such a rapid pace it’s unbelievable. You guys are in an incredible position. Prepare yourselves for it.”

Palmer encouraged the students to stand out.

Students asked Palmer about his stance on net neutrality (he said “there’s a lot of misinformation” out there about recently proposed policy), when he decided to enter politics (he said his wife “made the decision,” asking, “How can you expect someone else to go if you won’t go?”) and what are Congress’ priorities for the session.

“We’ve got to pass the tax bill,” Palmer said, noting that the government will “run out of money” on Dec. 8 unless an agreement is reached.

Palmer talked about a typical day for him while Congress is in session.

The Congressman said he rises around 6 a.m. for exercise and is rarely in bed before 11:30 p.m.

Palmer said he and other lawmakers regularly carry protein bars because skipping meals is common, and sleep in their offices to be able to work longer hours.

Palmer said he relies on a dependable staff to be able to stay informed about legislation though he reads every bill himself.

Palmer said the most challenging aspect of the job is managing his time, considering his desire to be hands-on and his involvement with various committees.

The Congressman said he views his position not as a career but as a chance to serve, which has allowed him to maintain his integrity and earn respect despite some decisions that have contradicted the establishment.