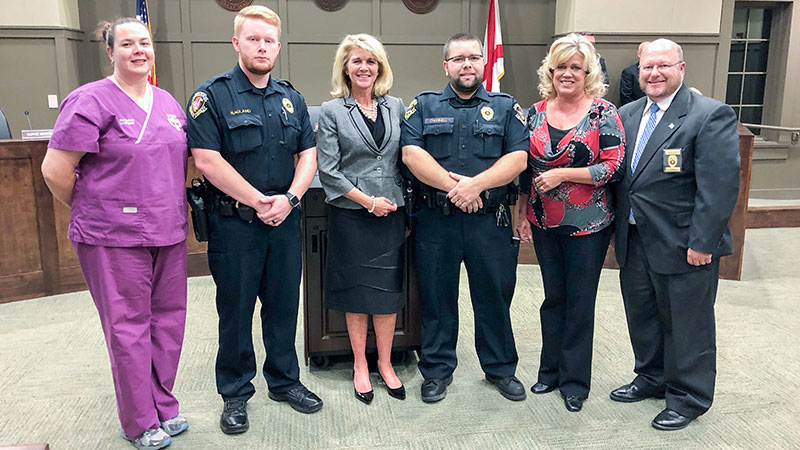 ALABASTER – As South Florida resident Katherine Grimes picked up her cell phone to call 911 on the evening of Oct. 23, she found it hard to collect herself after experiencing an incredible tragedy while driving home from Oklahoma.

While passing through Alabaster on I-65, Grimes’ mother, who was riding in the back seat, passed away.

“I called 911 and told the dispatcher ‘I don’t even know where I am, but my mom has passed away in my back seat,’” Grimes said during a recent phone call to Alabaster Mayor Marty Handlon. “The dispatcher (Charlotte Sidle) immediately said ‘Oh, honey I’m so sorry. We’ll get someone there to help you.’”

The first officer on the scene was detective Tommy Stewart.

“Tommy Stewart walked up to me and said ‘May I help you and may I pray with you?’” Grimes said. “Everyone there treated me with the most respect I’ve ever experienced.”

After Stewart and APD officers Zack Ragland and Cody Channell and Sgt. Sonny Jones helped Grimes to contact the appropriate officials, Shelby County Assistant Coroner Chad Addams and Coroner Lina Evans continued the display of professionalism and compassion before the officers worked together to cover Grimes’ stay in the Candlewood Suites hotel for the night.

The next day, Evans picked Grimes up at the hotel and transported her to the coroner’s office to say goodbye before Grimes returned home to Florida.

“I don’t know who took care of the hotel room. They wouldn’t tell me. When I asked, they said ‘Ma’am that’s just what we do here,’” Grimes said. “I said ‘No, that’s going above and beyond.’ Your people here are unbelievable.”

During a Nov. 27 City Council meeting, Grimes and her family members returned to Alabaster to thank the city for its support during one of the most stressful and tragic events in her life.

“I’m blown away that we have people in our community who care not only for our own residents, but for people from outside the community as well.”

“I honestly think that’s why (my mother) chose to take her last breath here, because she knew I would be taken care of,” Grimes said during the council meeting. “I was all alone and they were with me throughout the whole thing. We drove 700 miles today to tell you how blessed you are to have these people in your city.”