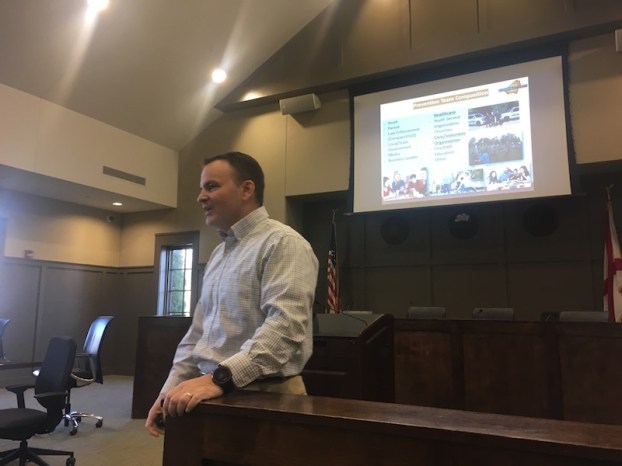 ALABASTER – Members of the Alabaster community discussed the root causes of drug and alcohol abuse among youth at the second Alabaster Drug Prevention Team meeting at the city’s council chambers at City Hall on Tuesday, Nov. 28.

The prevention team in Alabaster is one of several similar groups that were started by Compact 2020 for cities throughout Shelby County.

“That’s one of the differences we see in our assessments,” Miller said. “It’s not that we have a huge problem with it, but we’re seeing it more frequently here than in, say, Chelsea or North Shelby County.”

During the meeting, attendees broke up into groups to discuss why the three drugs affect Alabaster the most. In addition to determining the root causes, Miller said it was also important to identify factors that are specifically related to the city of Alabaster that could contribute to the problem.

One group, which discussed the causes and effects of marijuana, said there is a common misconception among parents and youth that marijuana is not harmful. Officer Jamison Lee from the Alabaster Police Department said they’ve noticed that marijuana is much more potent today than it was years ago and can often be laced with more dangerous drugs.

“Parents think it’s the same way that they used to smoke,” Lee said. “People have perfected the (marijuana) strains to make it more potent. It’s one of those things where, until you get it back from the lab, you don’t know what’s in it.”

Those who were in a group focused on alcohol suggested that underage drinking might occur in the city because there are not many events or places to go that are specifically geared toward youth. Local parent Lonnie Layton said traffic from other cities and counties may contribute to the amount of drunk driving that happens in Alabaster.

“I think there are a lot of people passing through Alabaster who are going to Hoover or Birmingham to drink,” Layton said.

In the case of prescription drug abuse, the last group said doctors over-prescribing certain medications was a large contributing factor. Youth who are prescribed certain drugs may also be able to make a profit from selling their medication. They also suggested that youth who abuse prescription drugs may feel an overwhelming amount of pressure to achieve.

All three groups determined that the availability of drugs, peer pressure, messages from popular culture and a lack of parental involvement were root causes for the abuse of each drug.

“If we’re talking about the young people, a lot of times there’s peer pressure there,” local realtor Melissa Woodson said.

Miller also cited the correlation he has seen between substance abuse and mental health issues in youth in the sixth through 12th grades.

“Once the kid has tried marijuana or tried alcohol and tarts thinking, ‘That’s the only time that I feel relief,’ it’s like talking to a brick wall after that,” Miller said.

The next Alabaster Drug Prevention Team meeting is scheduled for Jan. 23, 2018. More information about Compact 2020 and the drug prevention groups of each city can be found online at Compact2020.com

Calera man dies in I-65 wreck

HOOVER – The Hoover Police Department is investigating a two-vehicle wreck on Interstate 65 that left one man dead and... read more