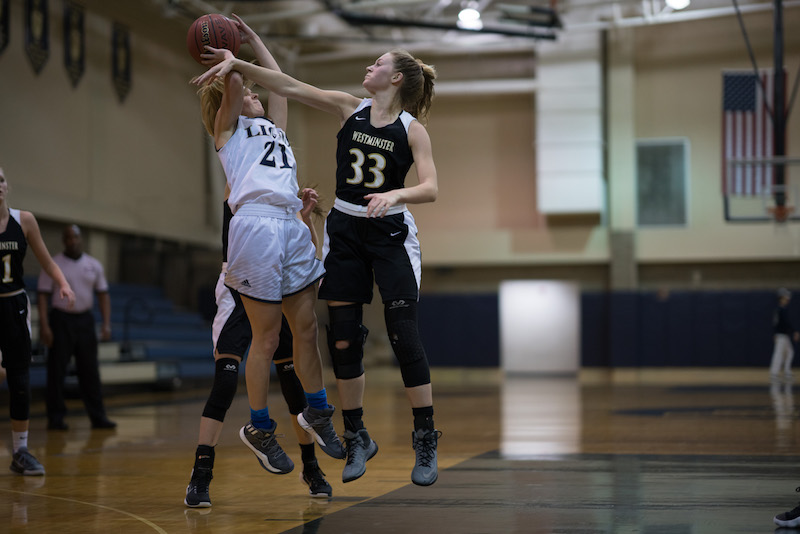 Briarwood was able to pick up a 40-34 win over Westminster at Oak Mountain behind 15 points from Lauren Smith. (For the Reporter/Adam Lee)

NORTH SHELBY – Briarwood and Westminster met in a girls basketball matchup on Tuesday, Nov. 28, for the battle of Alabama 119 as the two schools are separated by less than two miles down the road, which creates for an entertaining matchup each time these two Christian schools square off.

And while Briarwood is a 5A school compared to Westminster being a 1A school, it doesn’t take away from the competitiveness; especially considering the run to the Final 4 last spring for the Lady Knights basketball team. It led to game that came down to the fourth quarter, but eventually saw the Lions win a tightly contested 40-34 battle.

Westminster (2-2) returned just about everybody from that 2016-17 basketball team and it showed in a competitive game with Briarwood to open the night of competition.

The game got off to a slow start for the visiting Knights, however, as they posted just five points in the opening quarter, a 3-pointer from Megan Gache and a layup from Morgan White.

Briarwood (2-2) on the other hand came ready to play on both ends of the court. Obviously the defense showed up holding Westminster to just five points, but the offense posted 15 first-quarter points to match.

It couldn’t have been more opposite in the second quarter as the Lions were only able to knock down two shots and missed both free throws they attempted.

They scored 10 fewer points in the second quarter, while Westminster posted put up eight to cut into the lead. Heading into the half, Briarwood still held a 20-13 lead.

The Lions made the necessary halftime adjustments and got their offense tuned back up in the third quarter. They came out and put up their second strongest quarter of the game with 12 points as they limited the Knights to just seven points.

After the strong play in the quarter, Briarwood had extended its lead back to double digits at 32-20.

Thanks to Macy Mixon, Westminster wasn’t ready to roll over and give up down by 12 points. She came out and posted seven points in the fourth quarter, which was just one point shy of Briarwood’s entire team in the quarter.

The Knights got just seven more points from other players, however, as they were only able to outscore Briarwood 14-8 in the quarter, which led to the six-point, 40-34 loss.

Briarwood was led by 15 points from Smith as she knocked down three 3-pointers and all four of her free throws in the game. Hutchinson added 12 to give the Lions two double-figure scorers.

Westminster at Oak Mountain was led by Mixon with 13 points, while White added nine more points.