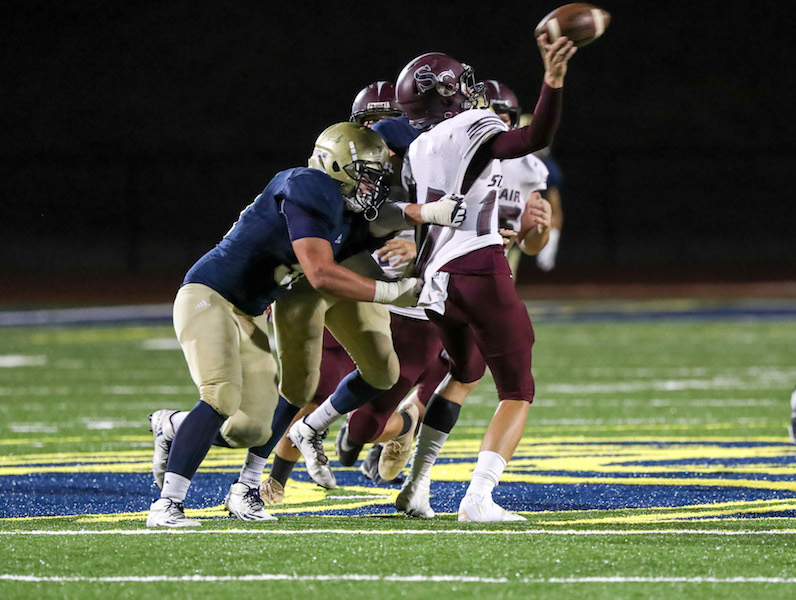 Briarwood will look for its second win over St. Clair County this season in the semifinals of the 5A playoffs this Friday night at home. The defense only gave up 6 points in the first game and has posted two shutouts thus far in the playoffs. (For the Reporter/Todd Kwarcinski)

It’s finally here. The moment the Briarwood Christian School Lions have been waiting for since the last seconds ticked off the clock in a 14-8 loss on Friday, Nov. 25, 2016 to the Wenonah Dragons.

That devastating six-point loss stuck with the Lions all off season as they came into the season determined to not just have another successful season, but redeem that season-ending in the semifinals from a year ago.

Now the time has come, as Briarwood has achieved that goal of getting back to the semifinals where they will square off against region foe St. Clair County, whom the Lions beat 31-6 in the regular season.

There is no overestimating the amount of determination this team will play with on Friday night as the majority of the players that felt that misery last year will be back with one more chance to protect their home turf and advance to the Class 5A State Championship in Tuscaloosa.

Briarwood has been the No. 1 team in the 5A classification since Week 3 of the season, and while the Saints have had brief stints in the top 10, they haven’t sustained that success. That was until the postseason, where they have now beaten three straight top 10 teams to advance to the playoffs.

St. Clair’s run up to this point has featured a 28-21 win over Guntersville, a dominant 48-21 win over Mae Jemison and a slim 27-26 overtime win over Wenonah.

After going 3-3 over their final six games, including a 26-7 loss to Wenonah, the recent success in the playoffs shows they are playing their best football of the season as they look for their second consecutive redemption win.

Briarwood’s run up to this points has not only featured another perfect regular season, but now an overall record of 13-0 thanks to three easy playoff wins.

The Lions have taken down Crossville, 62-0, Lee Huntsville, 35-14, and Etowah 31-0. That gives them two shutouts in the postseason, one of the No. 5 team, showing just how dominant this defense is.

It’s a defense that is giving up just 8.4 points per game through 13 games, which is just unheard of. They now have three shutouts on the season, have given up seven or less points in seven games, 14 or less points in all but one game and no more than 17 points.

You pair that with an offense that is scoring 33.2 points per game and you see why this team is No. 1 in the classification and a favorite to win the state championship.

In the first matchup between these two teams in the regular season, Briarwood had 11 penalties for 70 yards and three turnovers, yet still won the game by 25 points.

With head coach Fred Yancey in this business for close to 30 years, he will undoubtedly have his team play a cleaner football game. That tells me that Briarwood should come out and handle business in this matchup.

It also shows that the Lions were able to hold the Saints to just six points despite gifting them three turnovers. It’s due to that defense that has been stout all year, which is what will continue to prove its prowess in this game.

Briarwood has lost its last two semifinal appearances in 2011 and 2016, but have the best chance to advance to the state championship since the 2010 season where they went on to lose to Spanish Fort in the title game.

Now back one game short of the state championship for the second consecutive year, with the heartbreak of last year fuming their motivation, this Lions team will not fall one game short in 2017.