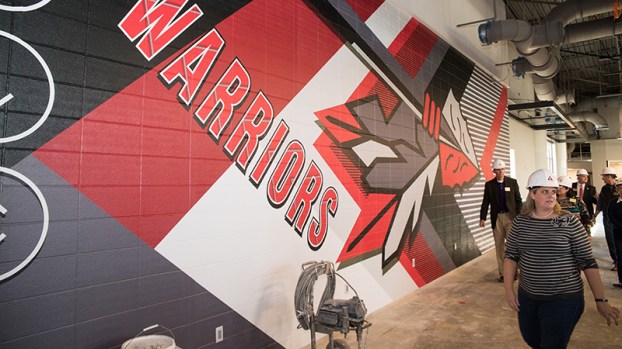 A state building inspector will determine over the next few weeks if he will issue a certificate of occupancy for Alabaster's new high school building to allow the school system to move into the building over the Christmas break. (File)

Contractors: New high school will be ready for students in January

ALABASTER – Contractors working to construct Alabaster’s new high school said although the project will not be entirely finished, the building will be ready to welcome students when they return from the Christmas holidays on Jan. 4.

During a Nov. 28 special-called Alabaster Board of Education meeting, project manager Jonathan Grammer with Volkert and representatives from subcontractors Argo Construction and Clements Dean Construction addressed School Board members to give them an update on the project.

Grammer said the state building inspector is set to tour the building in mid-December, and said crews are working to ensure the building is ready to pass inspection by then. He said the main items to be installed before the inspection are the life safety systems, such as the fire alarms and sprinkler system.

“If we can make all that happen, we’ll be ready to go for the (community open house on Dec.) 30th and (Jan.) 4th,” Grammer said. “We know what has to be done and what has to be ready for us to occupy on January 4.”

Grammer said the performing arts auditorium, indoor arena and sports facilities will not be completed by January, but said construction workers will enter the campus from the Kent Dairy Road entrance, will use a separate parking area and will be segregated from the students until those areas are completed.

“Those two areas are not going to impact our ability to occupy on January 4,” Grammer said.

Representatives from Argo Construction and Clements Dean Construction, which are the subcontractors working to construct the new school facilities, told School Board members they are “committed” to having the building ready to house students in January.

“We are committed, as we have been from the onset, to doing all we can to make this successful for you all,” said Gary Dean with Clements Dean. “Our prime mission is to get it completed on time.”

During its Nov. 13 meeting, the School Board voted to award a $67,500 bid from the Lambert Transfer and Storage company to move items from the old school to the new one while students are out for the Christmas break in December.

“We’ve got 450 seniors who expected to be in there as of August. We expect to be able to safely occupy this for our students,” Alabaster School Board President Dr. Wayne Vickers told the contractors. “We want to make sure everyone is doing everything they can to get us in there. It is our intent to be in that building, and it is everyone’s intent to do what we’ve got to do to be in there on time.”