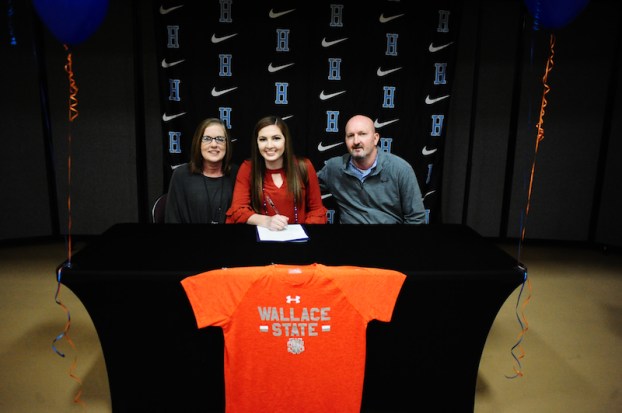 Rhodes was surrounded by family, friends, teammates and current and former coaches who packed the Helena Sports Complex to show support for Rhodes and her accomplishments.

Rhodes started on the varsity team as a setter all four years while at Helena High School and head coach Amanda Lewis said Rhodes naturally took the brunt of criticism for the team because of the setter position but knew she could always count on Rhodes to be a leader and captain.

“It’s no secret that Madison would be up here doing this at her senior year going somewhere to pursue her volleyball career,” Lewis said. “I know that Wallace is getting a fantastic player and I’ve had the opportunity to coach Madison for the last four years and I’m just blessed. Madison has all of these things that you as a coach can’t coach that she just has naturally. That comes very rarely in athletics. I have a thing called see ball, get ball and Madison does that. She has just always been a player that has stood out to me.”

Rhodes elaborated on what she’s most excited about playing volleyball at the next level and how playing at Helena helped her reach that goal.

“Just getting to keep playing is what I’m most excited about and I love volleyball,” Rhodes said.  “Playing at Helena just taught me to always do my best and to be a good teammate. You have to put your team above yourself if you really want to win because the best teams we had at Helena was when we all worked together instead of working by ourselves.”